The new-look takeaway was opened by brothers Abdul and AJ Khadir whose older brothers opened the old Balti Hut takeaway in 1998 before selling it on.

The pair have travelled extensively to research street food from around the World and have based their menu on their findings, catering for the UK’s new taste for street food.

With an Indian twist, they’ve put together a menu that features Dhaba style street food recipes.

Bombay Boxes and their very own Street Food Thali selection to make up the rest of the line-up.

They have also incorporated classic takeaway dishes, such as Tikka Masala and Jalfrezi.

They opened in December and officially launched yesterday. So far they have delivered to doors in Rubery, Frankley, Longbridge, Catshill and the surrounding areas.

Abdul told The Standard: “We have already had a really good reaction and demand has grown in weeks.

“We have more than 25 reviews on Facebook and have had about 400 people find us through Just Eat.

“We didn’t expect January to be busy but it has been so we’re very pleased with that.”

A lot of people from Rubery and the surrounding areas braved the cold to attend the launch on yesterday afternoon. 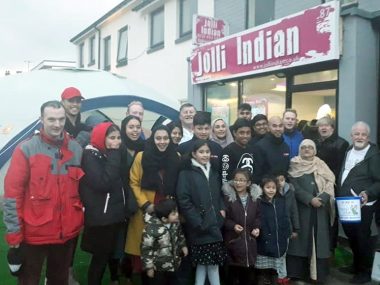 The crowds turned out for the launch despite the cold weather. Picture by Tristan Harris.

It also raised more than £200 for the charity Tracey’s Dream which is run by Stephen Pugh and his son Curtis.

The charity was started by Stephen Pugh in memory of his wife Tracey who always wanted to buy a caravan for cancer patients and their families to have free short breaks in to get away from the stresses and strains of treatment.

Tracey’s Dream has now bought the caravan in Evesham so it is far enough away for a break but close enough if patients in South Birmingham need to come back.

Here’s what Stephen and Curtis had to say about the charity and the day.

Also at the event was a live roadshow – music and DJs provided by South Birmingham Radio.

For more on Tracey’s Dream, check out the Facebook page, email traceysdream@outlook.com or call Stephen on 07766 100482.

For more on having the South Birmingham Radio roadshow at events, email bookings@sb-r.com