Labour announces its candidate for the forthcoming general election

BROMSGROVE Labour Party has announced this evening former district councillor Rory Shannon will be its candidate for the forthcoming general election.

Mr Shannon said he was delighted to have been chosen and admitted the task ahead would be a challenging one.

“Every election I have entered has been to win and I’m going to give it my best shot.”

On arguably the main issue of the poll, Brexit, Mr Shannon said Labour’s policy was clear.

“If we form the next government we will negotiate a better deal with the EU and then put it back to the people to choose between either our deal or to remain.

“No deal is not an option for us – Westminster has had three years to sort this out and has failed which is why we need to take it back to the people.”

He added, personally, he preferred a Norwegian model which would see the UK more closely linked with the EU but he conceded Britain would be unable to negotiate its own independent trade deals if that were the chosen option.

“The EU is the biggest trading block outside America and it is right nextdoor to us so it makes sense to have a trade deal with the bloc.”

And he hit out at Jo Swinson’s Liberal Democrats for their stance.

“Just saying we are going to revoke Article 50 and carry on as if nothing happened isn’t going to work.

“This country is divided and we think Labour’s policy is the best way of bringing it back together.” 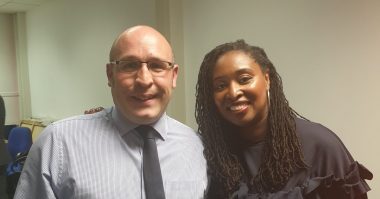 He said the Tories had vowed to bring policing levels back to what they were but having had eight or nine years without the required levels of policing had meant aggravated crime was at an all-time high.

“Just replacing them will not be enough because of what we have lost.

“It’s the same as the NHS – the Government has pledged all this money for the NHS but these increases in funding would not be needed if funding had not been reduced in the first place.”

He added Labour would ensure the NHS received the funding it needed so everyone had a decent standard of healthcare and pointed to John McDonnell’s pledge to bring an end to all PFI contracts.

When we pointed out they were brought in by the last Labour Government and had been seen by many since as an error because of the overall cost he added: “Raising the funding for these projects was the right thing to do but PFIs were the wrong way to do it – most Labour members would admit that.”

He said instead Labour would generate more revenue by ensuring everyone ‘paid their fair way’ in life through the taxation system, adding if people earn more, they should pay more into the system.

“We would make sure it was not just the lowest earners who paid the appropriate amount of tax – we must clamp down on tax loopholes and off-shore accounts.”

He also spoke in favour of renationalising the railway.

“I have just come back from Vienna where the railway is state-owned – it was just £12 for 24 hours to use whatever form of public transport you wanted.

“That was possible because it was all integrated properly, unlike it is here.”

He said Britain was one of the few places in Europe to not have a state-owned railway.

“Over there they fund their railways properly – some of our operators have rolling stock which is 40 or 50 years old.

“There has got to be a reason why European countries operate our trains and that reason is because our railways are profitable.

“When it is state-owned you take the profits made and put them straight back into the network, the rolling stock and the infrastructure, rather than into the pockets of fat cat bosses.”

He said by creating a fairly priced and reliable public transport system, more people would use it which would in turn go some way to addressing the climate emergency facing the UK.