A RALLYING call has been issued to people across Bromsgrove district to get involved in the Great British Spring Clean (GBSC) which returns next Saturday, May 28.

The event runs until June 13 and anti-litter campaign group Keep Bromsgrove Beautiful (KBB) is pledging to carry out 300 hours of picking and ​is joining the #MillionMileMission during this year’s clean.

The annual national campaign run by Keep Britain Tidy is now in its sixth year and is the nation’s biggest mass-action environmental campaign.

The #MillionMileMission came about after Keep Britain Tidy announced it wanted to pick litter to the equivalent of going to the moon and back twice.

Each hour completed by groups will be converted into miles covered. 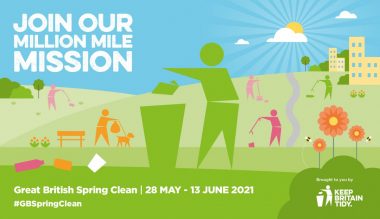 KBB celebrated its three-year anniversary in mid-May and its planned 300 hours means it will complete 100 hours for each of its years.

KBB founder Sarah Milburn said she was confident the group could smash its target.

“The Great British Spring Clean covers three weekends and two weeks – one of which is half term – and we have so many enthusiastic litter heroes in the Bromsgrove district who will be supporting the campaign.

“I am looking forward to seeing what we can achieve as a group, as our track record is pretty awesome.”

Schools across the district are urged to get involved with Keep Britain Tidy’s Great Big School Clean which runs over the same dates and is part of the #MillionMileMission.

With the support of Worcestershire County Councillors, KBB has so far funded 10 schools and scout groups with litter-picking kits and it’s hoped they will all be getting involved.

Sarah added: “Look out for school groups in the white KBB branded tabards.

“In the past 12 months our outdoor spaces and places have mattered to us more than ever before so we want people to show some love for the special places that helped us through lockdown.

“Volunteering to do something for the greater good – and being outdoors – results in improved mental and physical wellbeing.”

KBB’s online litter log to keep a tally of all the litter-picking will be back – anyone carrying out clean ups in their area should add their statistics to the pool.

Visit KeepBromsgroveBeautiful.com or check out the Keep Bromsgrove Beautiful Facebook page for more on KBB, the GBSC and the litter log.