Joy for bus users in Lickey, Rubery and Barnt Green as solution is found to serve areas cut after 202 changes

A SOLUTION has been found for buses to serve areas of Lickey, Rubery and Barnt Green which were cut from the timetable when the 202 service was replaced by the 44.

We reported back in May how many people were angered at the changes and residents and Coun Peter McDonald have since been campaigning for the stops to be reinstated.

Today Worcestershire County Council has revealed it has struck an agreement with Diamond Bus for the 145 and 145A to be extended to serve the areas which no longer had buses going to them.

From Monday, July 6, the 145 will be re-routed and will now go via Frankley, Waseley Road, and Leach Green Lane, along with Rose Hill, Twatling Road and Lickey Square.

It will provide an hourly service between Rubery and Bromsgrove from Monday to Saturday.

Coun McDonald welcomed the news and said: “It’s fantastic for those residents, particularly the elderly, vulnerable and young people who were left without a service and relied on the 202.

“It’s great that weeks of discussions have finally bore fruit and the county council recognised the need for changes to incorporate the areas which had been left off the 44.”

The timetables are below. 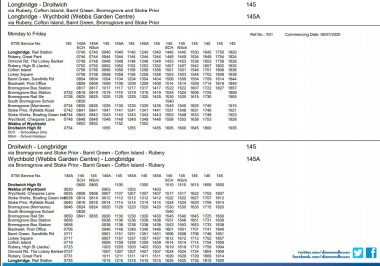 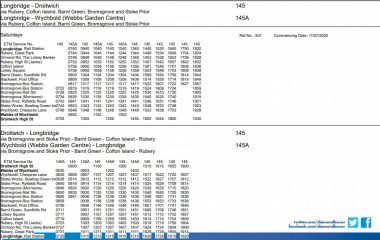 Coun Alan Amos, Worcestershire County Council’s Cabinet Member for Highways, said it was a very good example of the vision in the authority’s new Passenger Transport Strategy which was aimed at providing a wide and reliable bus network throughout the county to meet the needs of its residents and businesses.

“As this deal shows, we will look at any innovative proposal to save and expand services.

“Despite the temporary problems at the moment, buses are still the only meaningful alternative to the car for many people.

“This is why in this year’s budget we have invested the largest-ever increase in the bus subsidy to cover situations like this.

“Our strategy is to fill those gaps which are essential to people getting to work, the shops, education, the doctors, or leisure activities.”