THE NEW ‘EDDIE’ Bus which provides a lifeline service for Bromsgrove’s elderly, independent and disabled, was officially launched on Friday.

Originally called the Bromsgrove Minibus for the Elderly, the campaign for a community bus was first launched 35 years ago.

It provides transport for users from their houses, flats or care homes to go out for medical appointments, to local clubs or leisurely days out.

The latest state-of-the-art Peugeot Boxer, which cost £32,000, has a movable platform at the back to make it more accessible for those struggling to walk and wheelchairs which can also be anchored inside.

The new bus is named ‘EDDIE’ after Eddie Mowbray who volunteered as a driver for ten years and now organises the bookings and allocates the drivers.

The ribbons at the launch were officially cut by stalwart Eddie and Enid Harris who has used the service since its launch in 1985.

Eddie, who was also given the honour of cutting a special Eddie Bus cake, said: “Having it named after me was totally unexpected – I like that they have taken the trouble to honour me with it.” 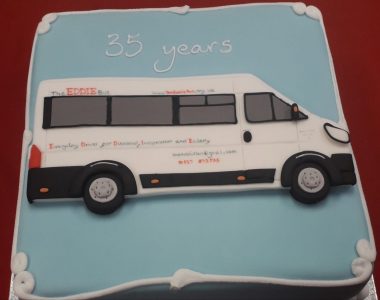 Enid said: “The new bus is fantastic – it’s comfortable, spacious and very smooth to ride on and the drivers are brilliant, so helpful.

“Without this service I wouldn’t be able to get out – it’s so reasonable.

“We couldn’t afford to use taxis all the time.”

Because of its popularity the new bus was out the day after it was delivered in December, taking a group to Worcester Cathedral and has been in use almost every day since.

In fact, the reason the official launch was delayed until last Friday was because it was the first free day it was available.

The minibus scheme was started in 1985 by Nora Byng, Margaret Fishley, David Hughes and Jack Grantham.

The four managed to raise £1,200 to set up the service from donations and subscriptions which was enough to get a second hand bus.

In 2004, with wear and tear taking its toll, a new vehicle was needed and David and Jack launched another campaign, successfully raising £32,000 to buy a Mercedes minibus – thanks to a successful National Lottery grant and contributions from charities, trusts and Asda.

But in 2010 there was heartbreak when the bus was stolen.

Unperturbed £17,700 was collected to get a second hand one for the Bromsgrove Minibus for the Elderly scheme.

In 2018 it was ‘touch and go’ as to whether the service would survive, due to a lack of drivers and an ageing minibus which – due to mice gnawing through a fuel line – needed £5,000 worth of repairs.

That, once repaired, was sold on and last year the fund for the EDDIE Bus was launched.

Then, thanks to another National Lottery grant, contributions from a number of charities and trusts and divisional fund donations from councillors Rita Dent and Luke Mallett, the £32,000 target was reached.

Trustee Robert Trigger, who spoke at the launch, said: “It was a real community effort and it is fitting the bus is named after Eddie because of his contribution to the scheme.

“It also gave us the chance to come up with an acronym.

“Because many of our users say they do not consider themselves elderly we call it ‘Everyday Drives for the Disabled, Independent and Elderly’ and passengers can choose which category they fall into.”

He added getting enough drivers was still a struggle for the service, especially during holiday times.

And he appealed to anyone who could give a few hours-a-week to drive residents to where they needed and wanted to go to get in touch.

Robert added he wanted to thank Greenfields Self Storage in Upton Warren which provides a secure unit for the bus to be stored.

The service is also still looking for sponsors who can help keep the EDDIE Bus on the road long-term and more users who need help getting out.

On this week’s Standard Podcast, we spoke to Eddie Mowbray, Enid Harris and Robert Trigger. Listen to it below on YouTube

Anyone who can help by providing funding or voluntary driving or anyone wanting to book the bus should call Robert on 07803 597081 or visit TheEddieBus.org.uk