PUPILS from Winterfold School in Chaddesley Corbett took to the airwaves on Friday after Heart FM’s Ed James helped them launch their own radio station.

The drivetime presenter and former breakfast show host took time out of his busy broadcasting schedule to help pupils with their first podcast which was broadcast into the school playground, enabling the music-loving children to listen and dance to the tunes.

After the official ribbon cutting ceremony and champagne toast in the school’s new studio, four talented year seven pupils – Harvey, Will, Louis and Isla – interviewed Ed, about his life on the radio. 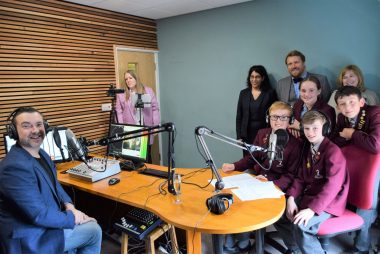 A school spokesperson said: “It was a thoroughly enjoyable afternoon, with the children dancing to everything from She Sells Sanctuary by The Cult, David Bowie’s Heroes to Can’t Stop the Feeling by Justin Timberlake, culminating with a giant conga around the playground.” 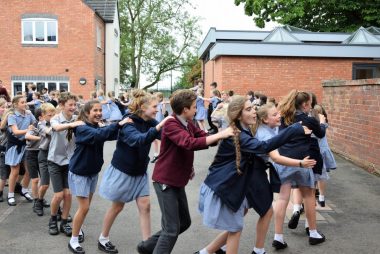 Head of music, Jerry Price added “We’re so excited about the future of Radio Winterfold.

“We plan to stream live very soon to allow the children to develop amazing broadcast skills for the modern world.”

Radio Winterfold was the brainchild of teachers Mr Loughton and Mr Price who wanted a space for children to showcase their work for an audience.

It would provide amazing opportunities for children write their own material and record, edit and broadcast their  shows to the world.

“The children now have an audience and a real purpose to write interesting material to a deadline, and then record and hear it at home.”

Mr Price added: “So many children will benefit in ways we perhaps haven’t yet even thought of, but certainly in terms of confidence and deeply engaging with their subjects, this is a real winner.”

The project was funded by the ‘Friends of Winterfold’, a team of parents who are dedicated to raising money to provide these sorts of initiatives for the benefit of Winterfold’s students.

Backing was also received from Bromsgrove school who threw their weight behind the project, meaning the inaugural broadcast could take place last Friday.

The station itself will produce podcasts at first written by and for the students allowing them to indulge in their interests and share them with everyone.

Interviews will be conducted with guests to the school, teachers and each other alongside other items such as quizzes, games, historical geographical and classical features.

Music written and recorded by the students will also feature alongside sports reports and an audio version of the school’s religious magazine.

Radio Winterfold looks forward to broadcasting live to the nation each month and releasing more regular facts filled podcasts written and edited by the students for anyone of any age to enjoy.

Videos from the afternoon are available on Winterfold Twitter feed @Winterfoldhs.

The Heart FM drivetime show with Ed and Gemma runs from 4pm to 7pm Monday to Friday, available on 100.7FM, online and on DAB.