HEREFORD and Worcester Fire and Rescue Service had an unprecedented day yesterday after rescuing people from 40 vehicles across the two counties and assisting with 30 incidents where properties were affected by floodwater.

Fire chief Michael Cadman said of the 70 people saved – between 9am yesterday and 7am this morning – there were 64 adults, three children and three teenagers.

A total of 38 rescue incidents were attended, 36 involved cars in floodwater. 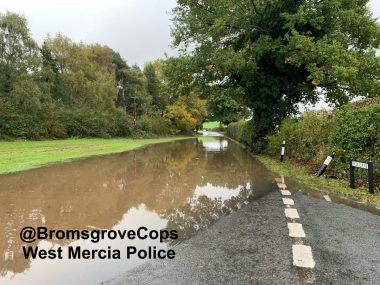 In Bromsgrove at 1am this morning fire crews helped at a property in Talbot Road where the kitchen was flooded, affecting the electrics.

Water was isolated by crews.

There were two incidents at the ford in Houndsfield Lane Ford, Truemans Heath.

In the first one a man was trapped in his car and had to be carried to safety by crews and in the second the man managed to get himself out and the fire crew arranged for the vehicle to be recovered.

At 3.50pm yesterday a large number of properties were affected by flooding.

The fire service sent a high volume pumping unit from Kidderminster to get rid of the water.

Yesterday at 3.16pm a car was trapped in floodwater in Fox Lane, Chaddesley Corbett. One person was rescued from the vehicle.

Around 1.15pm in Lower Chaddesley, two women were trapped in their car in floodwater – both were rescued by firefighters and assistance was given to other vehicles stranded there at the same time.

A number of roads were also shut after being hit by the wet weather.

In Bromsgrove district a number of stretches of the A448 Kidderminster Road were shut, including Fox Lane, Chaddesley Corbett.

Blackwell Road, Madeley Road near Fairfield, Alcester Road in Lickey End, Shaw Lane and Berry Lane in Bromsgrove were all completely impassable due to flooding.