THE ACTIONS of an off-duty firefighter have been praised after he saved the life of a young child trapped in a severe house fire in Northfield.

Russ Jones went to offer his help at the property in Farren Road on Thursday after reports of an ‘orange glow’.

After making a call to West Midlands Fire Control, Firefighter Jones was told the boy was missing in the property.

Hearing the screams and recognising how serious the first floor fire was, he worked out the boy must be on the ground floor so looked through the windows to try and find him.

And, seeing the curtains move in the front room, he looked closer and saw the youngster lying on the floor. 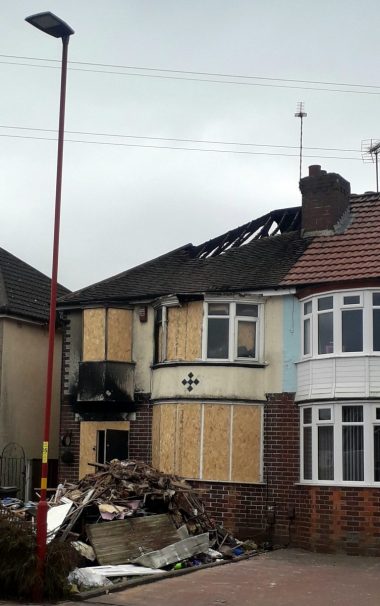 He smashed the window with a rock, removed the glass, reached in and pulled the child to safety.

The crew using breathing apparatus and hose reel jets tackled the large fire. which had broken out upstairs.

The boy was treated for minor injuries by West Midlands Ambulance Service paramedics before being taken to Birmingham Children’s Hospital.

Russ, who has been a firefighter for West Midlands Fire Service for the last 24 years, said:  “As soon as I saw the fire and was told a young child missing in the property, I had to do something.

“The fire was too intense upstairs and because I could hear the screams I knew the boy had to be on the ground floor.

“Without my firefighting kit there it was too dangerous for me to enter the property, so I had to find a way of trying to locate the boy and rescue him.

“I’m just so grateful I did and that he is ok.

“I did what any of my colleagues would have done in the same situation. I’m a dad myself, so I’m just so grateful I managed to locate the boy and get them out of the property.”

We’re very proud of Russ for saving the young boy’s life, had he not acted so quickly and professionally, this incident may have ended in tragedy.

“I’d also like to commend the on-duty crews from Northfield, Kings Norton and Woodgate Valley who arrived in just over three minutes and worked extremely hard to extinguish the severe fire.”

Fire Investigators who attended the scene confirmed the fire was accidental.

The family lost all their possessions in the fire and a fund-raising page set up for them has already had more than £4,200 pledged.