WE ALL need to take action to stop the Earth warming over 1.5degrees.

Firstly, our regular Saturday lunch-time vigils of two people, meditating on planet Earth’s plight, secondly litter-picking in the Lickey Hills and Sanders Park. Finally, we are eliciting the views of all Worcestershire County Council election candidates on climate-friendly policies, to share with you in April.

For example – will WCC commit to –

1. Declare a Climate and Ecological emergency?

2. Raise public awareness on this with businesses and residents?

The majority of carbon emissions – 70 per cent – is caused by 100 big companies.

What action can readers take to reduce our part in this? Re-use, repair, recycle, reduce car usage, and refuse to fly more that once a year.

Bromsgrove’s ‘Natures Intention’ no-waste shop makes it easier for us to do some of this. 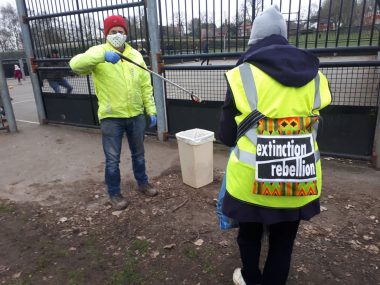 Most voters are not aware of our county councillors until they receive pre-election ‘addresses’ or until something disruptive happens like two huge house-building programmes bringing further pressure on our congested roads or the A38 road-widening scheme.

The A38 consultation sessions were poorly-advertised over too short a period so most of us missed them.

If you look hard on the WCC website you will find the strategy plan for reducing the impact of Climate Change but councillors only consider this annually. Their strategy focuses only on the 1.5 per cent of Worcestershire’s emissions under council control, excluding emissions from the £50m road-widening programme.

If you still don’t think WCC needs to declare an ‘emergency’, consider these – the Environment Agency CEO warns of extreme flooding in the UK (including Worcestershire) with ‘worst case scenario levels’ already reached. Urgent change is needed.

Epidemiologist Shanna Swan has shown hormone-disrupting chemicals in the environment are decimating human fertility and warns the average man today has half the sperm-count of his grandfather.

At the current rate of loss of pollinating bees they will die out by 2100. We call on all levels of government to launch a sustained publicity campaign to inform and educate us.

President Jo Biden is on board – he recognises COP 26 is the last major international opportunity to make changes.

If you are worried for future generations then join us at www.xrworcs.org.uk or on Facebook