EAGLE-EYED police officers pulled over two people wanted by the courts in Bromsgrove this morning.

The officers stopped the driver and passenger in the tipper lorry they were in on the A448.

The driver was also disqualified from driving and had no insurance.

And officers from West Mercia Police’s Local Policing  Priority Team – South who made the stop could not resist this cheeky Tweet about their find. 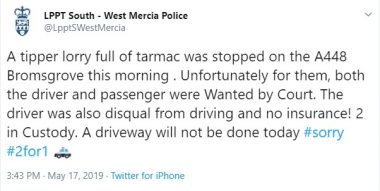