RESIDENTS were concerned about an ‘unidentified flying object’ (UFO) which was spotted in the skies above Bromsgrove last night.

We were contacted by Standard reader Mark Norton who had gone out into his garden to look for Jupiter and its moons were due to be visible to the naked eye.

He used his binoculars and then he noticed the strange shaped light.

He said: “I turned around and saw the weirdest thing I’ve ever seen in the night sky.

“There was absolutely no noise so a police helicopter or drone can be ruled out.

“Also, the light seemed to curve away from the source as it slowly moved down in the sky.”

He called out to his wife to come and see the object and she was equally baffled.

He then sketched his observations (below) and has contacted the Standard to see if anyone else witnessed it. 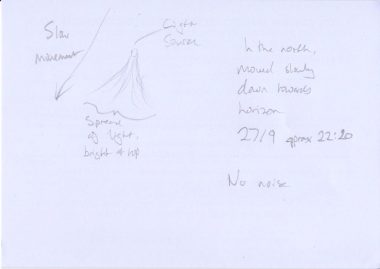 Intrigued by the sight, he carried out a Google search and found a videos others had taken around the UK and in Europe (below). He also discovered the cause – it was a United Launch Alliance (ULA) rocket burning up as it re-entered the Earth’s atmosphere.