A DISABLED man from Worcester said he felt ‘embarrassed’ after having to shuffle across a footbridge at Barnt Green railway station due to its lack off accessible entrances, writes Ryan Smith.

Dylan Cummings, who requires a wheelchair to get around, attempted to catch a train travelling to Birmingham New Street on platform three at the station at 7.57pm on Monday night.

He arrived at the station around five minutes before the train was due to arrive but found that he was unable to get access to platform three without the use of stairs.

He got out of his wheelchair and shuffled up and down the two staircases on the footbridge above the platforms, asking a friend to lift him back into his chair and push him across the bridge.

A second friend contacted assistance on the platform to try and arrange alternative transportation but he was told that none were available for them.

Dylan was returning from a meal with friends in Barnt Green to celebrate his 21st birthday but missed two trains attempting to get onto the platform. 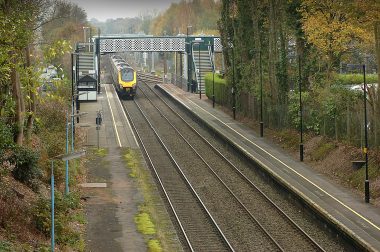 West Midlands Railway which runs the services to Barnt Green said Network Rail already had plans to install lifts at the station so it was not on its ‘Access for All’ funding application list as plans were already in place.

A Network Rail spokesperson said a plan was being worked on to improve access at Barnt Green to all platforms and trains.

“Lifts are part of this upgrade but for them to be installed, a wider package of improvements is needed and funding would need to be secured for the additional work.

“Platform four, where services from Birmingham to Redditch stop at Barnt Green usually every 20 minutes, does provide step-free access without use of the footbridge, and going towards Birmingham there is now an hourly train, usually at 57 minutes past the hour, calling at Platform one which is also step-free.”

He added people relying on specific trains could book Mobility Assistance through West Midlands Railway and a taxi could be provided from a fully accessible station on the Cross City line to Barnt Green.

“We are working closely with the DfT and the Office of Rail and Road to secure funding to improve access across all four platforms so Barnt Green station is accessible for everyone.”

A West Midlands Railway spokesperson said: “At present, 85 per cent of our stations across the West Midlands are already fully accessible, and we are working with Network Rail, through Access for All funding and other station improvement schemes, to bring even more of our stations up to modern standards.”

She added anyone wanting to ‘book assistance’ to get a taxi to the next closest accessible station should visit www.westmidlandsrailway.co.uk or call 0800 024 8998 for more details.