Dead horse found with bag wrapped around its head in Drayton, Belbroughton

WARNING: Do not scroll down any further if you want to avoid seeing the image.

A DEAD horse with a bag around its head was found near Belbroughton on November 11 by a member of the public.

Halesowen resident Michelle Hawthorne was driving down Egg Lane in Drayton when she spotted the carcass on the side of the road.

She said: “It was about 8am and quite dark so it was only the bag I noticed at first.

“I’d gone past but decided to reverse and take another look after it caught the corner of my eye.”

Once she realised the horse was dead Michelle called West Mercia Police to report the incident.

The police came out and rang the RSPCA as well as blocking off the lane to stop others from using it.

“I’m just absolutely shocked because it’s not the first time something like this has happened in the area,” said Michelle.

“We had a similar incident a few years ago where a dead horse was either dumped or died on the side of the road.

“But this is truly shocking. 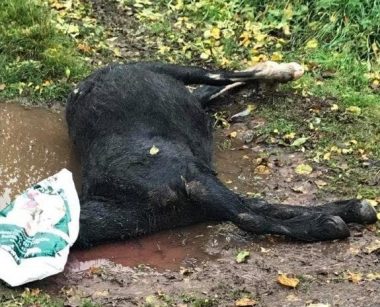 “If someone did do this I can’t understand how they could be so cruel.”

A spokesman for West Mercia Police said: “Police were called to reports of a concern for welfare for a horse that had been found by a member of the public in Drayton.

“Sadly, the horse was deceased.”

Joy as Bromsgrove awarded £14.5m from Levelling up Fund