COUNCILLORS from both Bromsgrove and Birmingham and other community champions have come together today to help a Rubery resident with an in issue she has at her property.

The mum of a two-year-old boy, who is registered blind, bought her house in Meadowfield Road a year ago.

At the time she had all the usual checks and structural surveys carried out which flagged up no problems.

Then a few months ago she was made aware she owned – and was responsible for – half the brook at the bottom of the garden.

Worse than that, in June, the land started slipping causing earth, rocks and a wall to fall into the water, blocking the brook’s flow.

She was told she needed to rectify the situation and it would cost £70,000 to sort out. 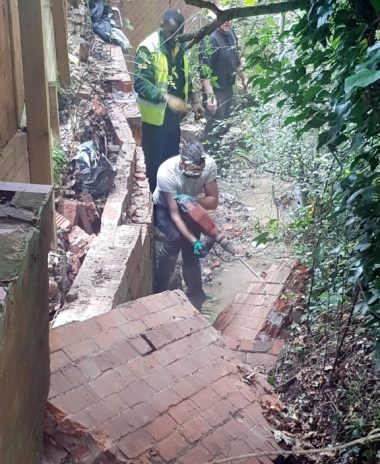 Drilling the wall which had fallen. Picture by Tristan Harris. © Bullivant Media.

She said: “I could not believe it when I was told I owned half the brook and had riparian responsibility – I or any of the other neighbours around here want either.”

Years ago some of her neighbours had their issues sorted through their insurance companies – but due to policy changes and ‘things tightening up’, she was told that was not possible here.

“The previous issues neighbours have had have been treated as flooding incidents but my insurers have put it down to ‘subsidence’ which I am not covered for.”

The situation is such that she has effectively lost a third of her garden as it has had to be cordoned off and she is unable to use it.

She spent thousands of pounds on it with landscaping and equipment and had to move a shed and her son’s climbing frame closer to the house.

She then contacted Coun Adrian Kriss (Rubery South) to ask if there was anything he could do to help.

As the property is on the border, he got in touch with Birmingham City Councillors Adrian Delaney and Simon Morrall and the assistance of Rubery Morrisons Community Champion Jane Williams and members of litter-picking group the Rubery Wombles was also enlisted. 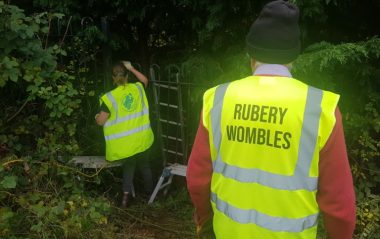 Today, they got together to remove the earth, rocks and fallen wall so the water in the brook could continue to flow again.

Coun Kriss said: “As soon as I heard about the immediate issue, I knew we had to do something to get it sorted.

“There’s no point in standing around pointing, we needed to get in there and get things done.”

Coun Delaney added: “It’s a fantastic team effort and I was happy to help.

“There are a lot of areas on the border which have issues and we work together a lot to get them sorted – I contact him if there is something on the Bromsgrove side and he vice-versa.” 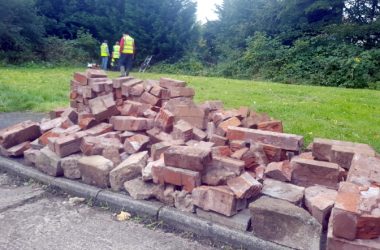 Some of the bricks collected from the area. Picture by Tristan Harris. © Bullivant Media.

According to the latest structural engineer’s findings there are two long-term solutions – one is to rebuild the wall and the garden and the other is to batter back the bank to create a slope – but both will be costly.

Right now, she is relieved the immediate issues have been temporarily sorted.

The resident said: “I’m really grateful to Adrian and everyone involved in helping today – they certainly don’t just ‘talk the talk’, they get things done.”

She also praised Bromsgrove District Council for its help, even though the issue is on the Birmingham side and MP Sajid Javid who is looking into the issue and trying to help her with a long-term solution.