A COUNCILLOR has come under fire for a Tweet he issued during Bromsgrove Pride, saying he would prefer police to be ‘fighting crime rather than being at a carnival’.

Responding to a post and picture of Bromsgrove Safer Neighbourhood Team officers on their stall in the High Street, Coun Adam Kent wrote: “Once upon a time, the police fought crime! My residents suffer with anti-social behaviour, burglaries, car theft and speeding. They will be delighted you can spare officers for a carnival’.” 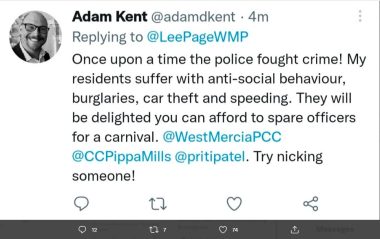 Insp Lee Page responded by saying that officers Anna and Eleanor were at the event after reports of homophobic and transphobic abuse towards young people in Bromsgrove, adding the town’s LGBTQ+ community were delighted with their presence and the team had his full support.

He added: “There are more than two officers policing Bromsgrove.”

In another tweet, Insp Page said: “Equally important is hate crime against marginalised communities, who also have a right to be heard.

“Our efforts are therefore focused on providing a fair, accessible, accountable neighbourhood policing service to all and I make no apologies for that. It’s our #PolicingPromise.”

Insp Page stated Coun Kent had ‘blocked him’ on the social media platform, adding he was disappointed he had done that before he had the opportunity to respond to his public criticism of him and his team.

“Speeding, anti-social behaviour and burglary are important, of course they are – which is why I met with him to discuss these issues just a few weeks ago.” 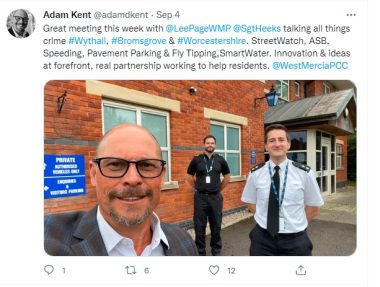 We contacted Coun Kent after others got in touch with the Standard to complain about his Tweet.

He issued the following statement.

“My residents on the border of Birmingham are blighted by serious crime including aggravated vehicle theft, recently in Hollywood Wythall, burglaries, fly-tipping with massive cannabis dumps wantonly abounded with impunity and no fear of prosecution in the middle of well used roads in Wythall.

“Residents complain every day about speeding and their concerns are addressed only by well-meaning but powerless PCSOs on the side of the road sending reports to a road safety unit that should be rebranded the road safety prevention unit.

“Community speed watch groups are encouraged by the police then rejected as the speeds recorded in the areas of concern to residents are too high, how ridiculous is that?

“Last week I received an email from Lee Page saying that the reason that they couldn’t prosecute drivers was because of missing paperwork and blamed WCC more buck passing by the public sector a failure to accept that we all should work together to deal with these issues.

“Pretty much every time I request a speed reduction I am advised that the police will only support it and enforce if WCC will do engineering works at the taxpayers cost this is absurd and isn’t the same policy as in areas like Birmingham which have implemented blanket speed reductions with just signage.”

“Fly tipping apparently isn’t the police’s responsibility despite it being clear that serious organised crime is happening evidenced by not only the remnants of cannabis grows but also often accompanied by the expensive equipment.

“Then after hearing many times that they don’t have enough officers despite large increase in West Mercia over the last few years I see a stand publicised on social media at a carnival in Bromsgrove. The police can’t sort out speeding but they can spend a day at a carnival.”

He claimed his tweet was nothing to do with it being Bromsgrove Pride but would have applied to any carnival or event, accusing the police of misrepresenting his Tweet. He added that was why he blocked Insp Page.

“I’m sorry but I don’t think with the issues my residents are facing that they will feel having two officers attend a carnival in Bromsgrove is an effective use of resources or taxpayers cash.

“The amount of time that the officers spend at these events on social media and the subsequent messaging also clearly need investigation.

“I recognise and support the LGBT community but believe police resources should be focused on dealing with crime.”

In response to Coun Kent’s claims, Chief Inspector Ed Hancox said: “West Mercia Police are responsible for the protection of every person across Bromsgrove District.

“Our officers, our staff and our PCSOs work hard day and night to protect people from harm.

“This includes all people from all backgrounds and of all sexual orientation.

“Our attendance at Bromsgrove Pride had two elements to it – a policing operation to provide reassurance following reports of hate crime in the area and to show our support for a community alongside every police force across the country on the day.

“This is in line with our Local Policing Community Charter.

“I will send my officers out to speak with the community publicly or on a one-to-one basis all day every day in the pursuit of justice and protecting people from harm.

“No reasonable person would expect us to do otherwise and the response to our public engagement has been overwhelmingly positive.

“I would also like to reassure local people that we are capable of doing more than one thing at once.

“Whilst the two officers from the Safer Neighbourhood Team were supporting the Pride event, other officers were responding to calls from the public, and tackling issues to keep the community safe.

“We also work closely with our partners to achieve the best results for the public – this includes Bromsgrove District Council and Worcestershire County Council, both of whom remain committed to working with my team.

“My officers and I are proud of who we are, the work we do and the communities we serve.”

Earlier today, at the Conservative Party Conference, Coun Kent posted on Twitter a picture of himself at the LGBT+ Conservatives stand (below). 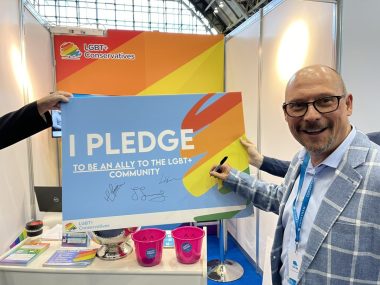