A COUNTY councillor has called on the district council action to remove a large amount of rubbish which has been dumped in Bromsgrove town centre.

Liberal Democrat Coun Joshua Robinson, whose division covers the area, was contacted by people about the unsightly mess on land at the back of the shops in between the High Street to the main Birmingham Road. 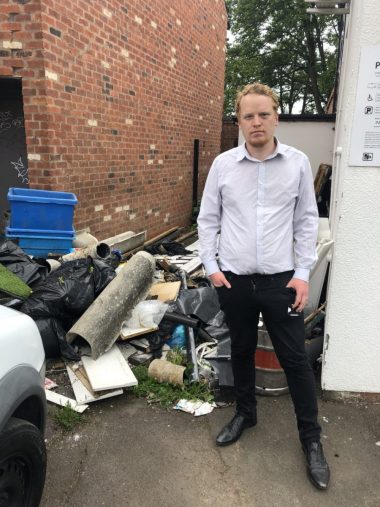 He said he had contacted the district council about the pile which included wood, beer barrels and fake turf.

Coun Robinson added the authority was unable to clear it as the waste was on private land.

He said, more worryingly, the fire service had expressed concerns as it was thought it could contain asbestos and pose a serious fire risk.

The fire service has since said preventative measures had been taken to remove that risk.

Hereford and Worcester Fire and Rescue Service station commander Bob Sproat said: “As an active member of the multi-agency Bromsgrove Town Centre Group, I was able to effectively identify and mitigate a potential risk to the public, helping to fulfil one of the principal functions of the group which is to ensure that the High Street is an attractive and safe place to visit.”

A Bromsgrove District Council spokesperson said: “We have been in talks with the landowner who are co-operative and are liaising with the tenants to make arrangements to have the rubbish removed.

“The waste is not on the public thoroughfare and I’d like to reassure our residents that the risk to the wider public is low.”

Coun Robinson added: “Bromsgrove District Council is trying to get it resolved but it has been two or three weeks now and seems like there’s an impasse.”