A CONTROVERSIAL temporary bus lane installed on the Bristol Road South between Northfield and Selly Oak will be scrapped after large scale public opposition against it.

We reported back in October how residents had taken to social media to complain about the lane which ‘appeared overnight with no consultation’ as part of Birmingham City Council’s Emergency Transport Plan.

Labour councillor for Weoley and Selly Oak, Julie Johnson, submitted a petition of over 1,000 residents’ signatures to the council opposing the bus lane and another one, spearheaded by Northfield MP Gary Sambrook contained more than 2,900 names.

The council also conducted its own formal review with 80 per cent of respondents calling for the bus lane to go. 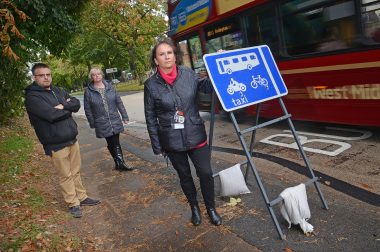 Coun Johnson said: “The bus lane was only ever a temporary measure, but it was clear that it wasn’t appropriate for that stretch of the Bristol Road South.

“Thank you to everyone who made your voice heard on this issue, I will be continuing to work with you and my colleagues at Birmingham

City Council to find the best long-term solutions for the Bristol Road South that will help us all to travel around our city in a sustainable way, ensuring that walking and cycling routes are as safe as possible.”

Coun Waseem Zaffar, the Cabinet Member for Transport and Environment, also thanked everyone who responded and said the council had listened to residents.

Road, giving cyclists a segregated cycle lane, allowing them to travel safely along the road, entirely separate from the buses, cars and other road users.”

He said supporting bus priority was a key ambition of the council and moving forward it would continue to reallocate road space that improved the reliability of buses across our city.

He urged everyone to take part in the process to form a sustainable, long-term plan for the Bristol Road South.

Mr Sambrook said it was great the council had listened to the thousands of residents who voiced concerns.

He criticised the council, claiming the authority did not let him or the other residents who had signed the petition know about the decision.

Coun Simon Morrall (Frankley Great Park Ward) who was among the campaigners said: “Labour installed this ridiculous bus lane without any public consultation and they paid for it by spending emergency Government funding provided during the Covid-19 pandemic.

“What’s worse, is when I challenged the Labour cabinet member on audit committee, he couldn’t give me a figure on how much they had wasted on it.”

Local Weoley campaigner Paul Smith added: “Many local people have raised this with me especially the increase in traffic and also how dangerous some of the turns were so I am very happy like local residents about this news.”