NEW safety signs are being used outside St Peter’s Catholic First School in Bromsgrove in a bid to improve safety and prevent on illegal, irresponsible and dangerous driving, writes Abi Cook.

The child-sized signs were paid for by the divisional funds contributed by Worcestershire County Council Labour councillors Luke Mallett and Chris Bloore. 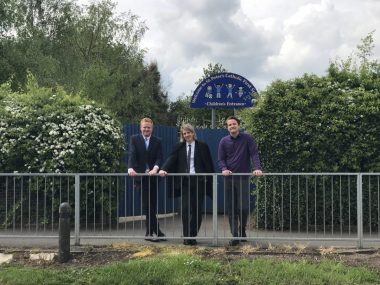 Mr Bloore, who resigned from the authority last week as he is moving to Canada to live and work, said during the last election campaign, dangerous parking and other road safety issues outside schools were among the commonest issues people raised on the doorstep.

Following that the Labour representatives liaised with the school to come up with ideas on how to tackle the problem and the child-sized signs were chosen after proving successful in other areas.

Bromsgrove District Councillors Michael Thompson and Harrison Rone-Clarke welcomed the move and headed to the school to see the signs in action.

“We will continue to lobby the district council to act urgently to catch up other local authorities such as Birmingham and Solihull who are pushing forward with such ideas.

“Today’s news is a small step in the right direction of working with our schools to improve safety.”