POLICE have released CCTV pictures of the armed raid which happened at an Alvechurch supermarket on Sunday night.

Four armed masked men burst into the Co-Op in The Square, at 10.45pm, escaping with cash and cigarettes.

All four were men, of average height and build and were all wearing gloves and dark clothing. 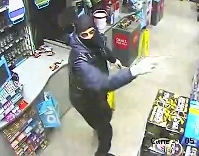 One of the masks the men were wearing had a skull on it and one suspect wore a blue jacket with a stripe down the side.

West Mercia Police have urged anyone in the area at the time to get in touch.

DI Gerry Smith said: “We would like to hear from anyone in the area at the time who saw anyone acting suspiciously in The Square.”