THE CATSHILL Baptist Foodbank has seen a staggering increase in demand of more than 500 per cent during the pandemic and there are fears it will only get worse in the coming months.

The organisation also provided half-term help for children who usually received free school meals – dishing out almost 50 bags of emergency food to three schools in the town ahead of the holidays starting.

Plans are also in place to continue to support families in need, as identified by schools.

The newly released figures show that so far in 2020, the foodbank has supplied 80,000 meals to people in and around Bromsgrove – more than five times higher than the statistics for the same period in 2019. 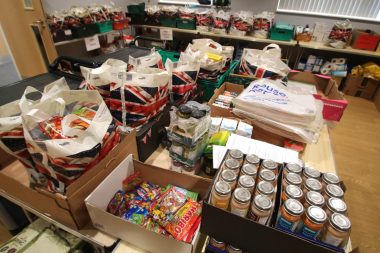 Foodbank managers Keith and Jackie Medler said the numbers spoke for themselves.

Keith said: “This is an astonishing increase in need for emergency food.

“But through huge generosity from donors, hard work by our volunteers and sizeable Government grants, we’ve been able to help increasing numbers of people at an incredibly difficult time.”

The foodbank has provided consistent help throughout lockdown, but may now face even more demand.

In the latest week, emergency long-life food was supplied to more than 80 adults and children, on top of the supplies sent to schools – a big increase on the previous week.

And anecdotal evidence shows that Covid-related redundancies are now starting to have an impact.

Jackie said: “For the first time, we have had clients explaining that they need help because they’ve just been made redundant and have no money to feed themselves and their families.

“Unfortunately this is almost certain to increase in the weeks ahead, but we are ready to help.”

It is an independent charity operation run by Catshill Baptist Church on Milton Road, and provides support for people of all religions or none.

Jackie added: “In times such as this, people are welcome to contact us directly for help, although ideally they would be referred to the foodbank by an official organisation like a school, doctor or support worker as this simplifies the assessment process.”

Donations of long-life food only can be dropped off at the church by arrangement, or collected by volunteers if need be.

A list of shops that also accept donations, and the types of food that are needed, can be found on the Catshill Baptist Foodbank Facebook page.