A WHITE cat who was found with badly wounded and infected ears on Boxing Day is looking for a new home.

The female, who has since been named Snowy, is now at the RSPCA Newbrook Farm Animal Hospital in Frankley following her ordeal.

Residents in Devonshire Avenue, Birmingham, were worried about the moggy so they collected her and handed her over to the RSPCA. 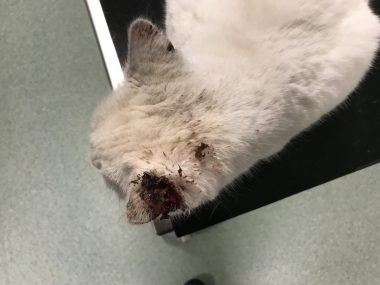 Because of the extent of the injuries she had sustained she will have to have both her ears removed.

RSPCA collection officer Cara Gibbon who collected snowy said: “Local people had been feeding the cat and keeping an eye on her for some time as they were concerned about her.

“It looks as though she’s suffering from skin cancer on both ears – something that’s surprisingly common, particularly in white cats – so I took her to RSPCA Newbrook Farm Animal Hospital where she’ll have both ears removed.

“She’ll be fine without her ears and will be much more comfortable so once she’s recovered we’ll try to find her a lovely new home.”

The RSPCA was busy nationwide over the festive season with more than 70 calls an hour over Christmas week.

The charity’s staff working over the Christmas break responded to almost 12,000 calls about more than 7,000 animals in need of help

The charity has appealed for ‘gifts’ to help it continue its good work.