The display has been created to mark the centenary of the end of the First World War.

More than 50 people turned out and braved sleet and even a light snow fall to witness the occasion.

The centrepiece featured the number ‘100’ made with white poppies, a symbol of peace.

There were also purple poppies incorporated into the design which remember the animals, primarily horses, which also lost their lives in The Great War.

Most of the poppies had been made in Bromsgrove but others were sent from all over the UK, including Scotland and Wales.

The display is also floodlit so can be viewed 24-hours-a-day.

Prior to the unveiling the Bromsgrove Community Choir sang wartime songs, including Keep the Home Fires Burning, It’s a Long Way to Tipperary and Pack Up Your Troubles. 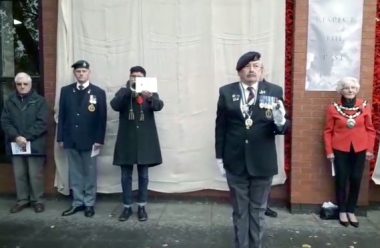 There was then a special service featuring an announcement by Bromsgrove Town Crier Kevin Ward, words by the town’s Royal British Legion chairman Patrick Smith, reflection by Rev Richard Wilde and the Last Post and Reveille played by Rev Ray Khan, the town’s RBL Chaplain.

She said: “I was absolutely astounded by the amount of work which has been done by all the volunteers to create this beautiful cascade.

“I was totally amazed by the effect it had when it was revealed.

“There is a great opportunity between now and Remembrance Sunday for everyone to come and see it.” 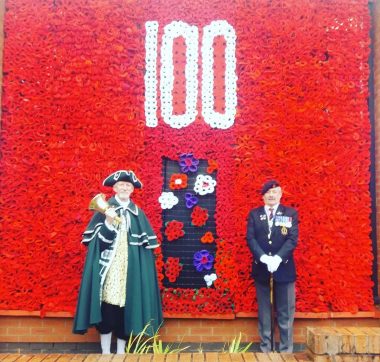 John Wyatt said: “We first mentioned the idea in February and the idea has spread like wild fire and so many people have told their friends and relatives and we’ve had poppies from all around the country.

“It’s absolutely amazing – they’re all individual, all different and make up a wonderful display.”

“Every person who died was a tragic loss to somebody.”

The dedication of the poppy cascade at Bromsgrove Methodist Centre, created to commemorate the centenary of the end of the First World War. It features 12,500 knitted and crocheted poppies, most made here in Bromsgrove and others sent in from all over the UK.

We screened the ceremony live on our Facebook page. 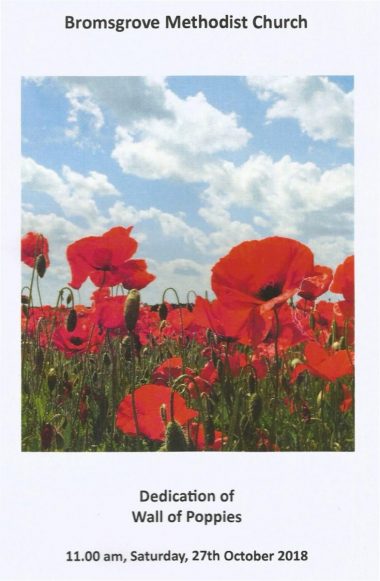