Bromsgrove's wildlife heroes honoured for looking after their local environments

TWO Bromsgrove residents were honoured by the Worcestershire Wildlife Trust (WWT) for the work they have done to help nature in their local communities, writes Louise Newton.

Pam Wearing created a habitat for deer, badgers and foxes in her garden and Keith Woolford leads the team which look after the privately owned ancient woodland High Hills Country Park.

There were 37 people in total from across the county who were handed WWT Wildlife Heroes awards.

The recipients were either involved individually, as a business, as a community group or as a school.

Sadie Carr Simons, from the trust, said: “This is the second awards ceremony that we’ve held and it’s been fantastic to meet so many people who are helping the wildlife where they live. 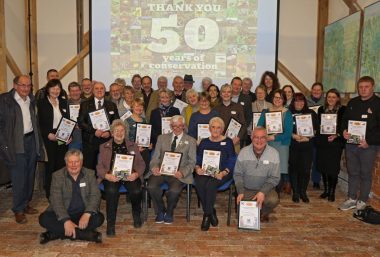 37 people in total received awards from the trust. Picture by Wendy Carter. s

“We’ve met farmers who champion habitats for wildlife, volunteers who take care of their local greenspaces, individuals who monitor their local wildlife and people who are inspiring the friends, family, and the net generation about the wonders of wildlife and our natural world.”

The awards are still open for entry and people wanting to apply should visit worcswildlifetrust.co.uk/wildlife-heroes or call Sadie on 01905 754919.