BROMSGROVE’S ‘Stay at Home Street Party’ will now take place this Friday, May 8, after the organisers felt it would be better to hold it on the bank holiday itself.

The event was going to take place on Sunday – when ‘the biggest street party Bromsgrove had ever seen’ was due to take place before it was postponed because of Coronavirus.

That event will now take place on May 9, 2021, but organisers Jules Evans and the town’s Royal British Legion could not let this year’s anniversary pass without commemoration.

Friday’s ‘Stay at Home Street Party’ will be held with the help of  former Artrix technical co-ordinator Chris Lee, who is putting together a multitude of entertainment for the Virtual VE Day event.

Links will be made available to the films that were due to be shown on the big screen and the day will culminate with a mass online singalong of wartime classic ‘We’ll Meet Again’. 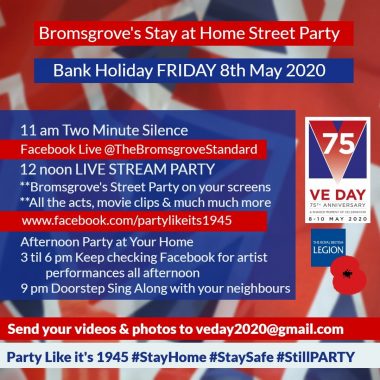 Ready for the anniversary, people are urged to decorate the front of their homes in red, white and blue, with bunting and Union Flags.

And on the Friday they are urged to take their phones, laptops or tablets out with them for the entertainment and hold picnics in their front gardens or on their driveways.

Jules said it was more appropriate to hold it on the Friday – the day when the 75th anniversary of VE Day will be commemorated nationally.

“We have got as many people who were due to perform on the day as we could to be involved in the virtual version.

“If everyone in each household remains in their gardens social distancing will be maintained.

“It’s important we have something to look forward to ahead of the anniversary and to mark the day.

“This way we will be able to get some of the community spirit and we will also be asking for people’s pictures of the day afterwards so we can record everything that took place.”

Pictures can be emailed to veday2020@gmail.com .