WITH the annual Bromsgrove Fair Day – that was due to be held tomorrow – cancelled because of Coronavirus, the Bellman of the Court Kevin Ward and Bailiff Jo Slade gathered earlier today for the reading of the Charter.

The Charter was granted in 1199 by King John, giving official permission for the town to hold a fair on the feast day of St John the Baptist – the Patron Saint of the parish. 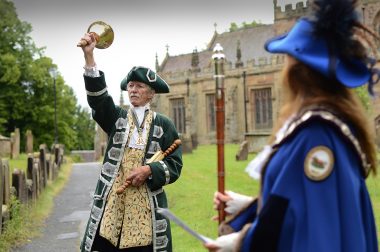 Kevin Ward announces the Charter will be read. Picture by Marcus Mingins 2620015MMR2

Usually on Fair Day the town is brought alive by the colourful Court Leet procession as its members – in their full regalia – parade from Perry Hall to the Housman Statue.

There, the annual assizes are performed to test the town’s ale, bread, leather and flesh (meat) are of a good enough quality for Bromsgrove people.

The verdicts are given near the statue from the relevant members of the ancient Court with a report on the streams given by the Brook Looker.

But this year, because of the Coronavirus pandemic, the event had to be cancelled.

Apart from the two World Wars, this was the only other time that had happened – it was even held during the Great Plague. 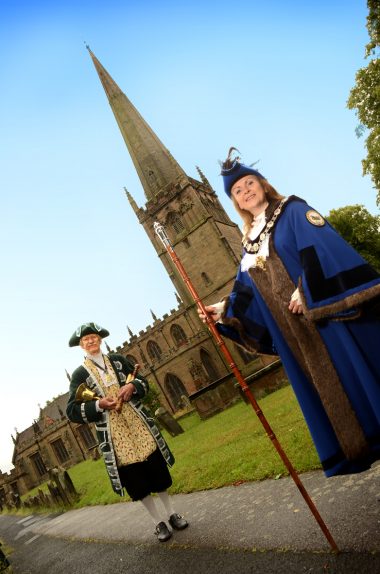 The 2020 Fair Day was all set to be a very historic occasion as the first female Bailiff in the Court’s 821 years, Ms Joanne Slade, was to lead the parade along the High Street and the ancient tradition of the fair coming to town was to be revived.

The colourful Court Leet parade was planned to be extended to include local scout and guide groups and the High Street was to be full with a capacity market of mostly local sellers and charities in traditional costumes.

The traditional assizes of ale, bread, meat and leather given by the Officers of the Court were to be followed by entertainment from local choirs and musicians.

Jo said: “We just couldn’t let this important date in our town’s calendar pass without proclaiming the Charter which has been a key part of our Court Leet’s 821 year history.

“It is one of the things which makes our town unique and needed to be marked in some way.

“We are disappointed we cannot hold the Elizabethan Market and Fair Day but we hope to hold it on June 26 next year ‘ad infinitum’ (forever.”

Although the current restrictions in place have stopped the 2020 Fair Day from taking place, we at the Standard were there to stream the event live on our Facebook page.

Click the video below to see it and below that is a short history of the Bromsgrove Court Leet.

In the absence of this year's Court Leet Fair Day and Elizabethan Market which had to be cancelled because of Coronavirus, Bailiff Jo Slade is reading the Charter King John granted Bromsgrove in 1199 meaning an annual Fair Day could be held.

When the Domesday Book was written in 1086 Bromsgrove is recorded as being “King William’s land” with a Reeve, Beadle and a Priest and a community of 18 villages. Just over one hundred years later and the town, still within the Royal Manor, was granted a charter to hold a Fair on 24th June, Midsummer’s day. The Charter was one of the first in Worcestershire and the annual, important Fair was for buying and selling horses and cattle, linen and wollen cloth, raw wool, cheese and other goods.

The early fairs and markets probably took place at the bottom of the church steps on a green or on cobbled street by the ford in the brook. As the year’s passed, and the town grew in size, the fairs were held on the High Street and the shopkeepers could bring their wares onto the street and residents could create a pen in front of their property and hire it out to sellers.

The Midsummer Fair was a highlight of the year for the town, attracting visitors from far afield, farmers in white smocks with decorated horses, acrobats and jugglers, music and songs from minstrels, gypsies in colourful costumes telling fortunes – a day of merriment for the town, along side the serious business of selling animals and goods.

From the early days of the Fair, The Bailiff, in full regalia of office, along with Ealdormen and Court Leet members would walk the Fair, with bellman and pole bearers to accompany them. This tradition continues to this day, and in the 1980’s a traditional style street market was reintroduced to the day, now held on the closest Saturday to Midsummer’s day.

In recent years on Fair Day, local craft traders and charities are encouraged to take a stall at the market which runs alongside the weekly Saturday market in the High Street. Schools and Scout groups are invited to join in the day and townsfolk are welcomed to enjoy the Fair and partake in this centuries old occasion.

The Bailiff of the Court Leet proclaims the Charter of 1199 and the Officers of the Court report on their findings. Ale Taster, Searcher and Sealer of Leather, Brook Looker, Breadweigher and Carnitor all carry out an “assize” to show to the townsfolk that the goods offered for sale are good, wholesome and fit for consumption, and that the brooks are well maintained.