THE EYE-CATCHING ‘poppy wall’ created last year to commemorate the centenary of the end of the First World War has returned this year to mark the 75th anniversary of the D-Day Landings.

The display on the wall of Bromsgrove Methodist Centre, Stratford Road, is made up of 18,000 red knitted poppies and last year had ‘100’ in white poppies which has now been changed to show ‘D-Day 75’.

The woollen poppies have been knitted or crocheted by many people from the church congregation but also people of Bromsgrove and surrounding areas and more were sent by post from afar afield as Sheffield and Cardiff. 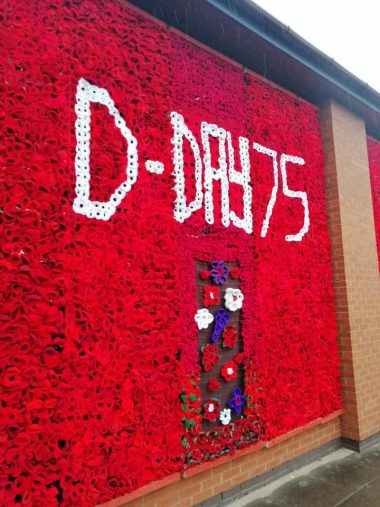 Brenda Whipp from the church said: “The community spirit that resulted from the project has been overwhelming.

“When a small band of people from the church took on the task, we aimed for 6,000 poppies to create a centre piece of five panels to hang on the outside wall facing the Stratford Road.

“We were concerned at the time that that figure was a bit ambitious and we would struggle.

“But when we constructed the framework to hold the poppies and began to attach them all, it was evident that the poppies were now flooding into the church from all over the place.

“Generous people with no church connections whatsoever, wanted to be involved in honouring the victims of war, whether that be soldiers, or the various animals involved.”

A section in the centre of the display features purple poppies to represent the fallen animals as well as the white poppies, a symbol of peace.

There were 11 panels created, along with a further two smaller panels which are displayed in the church car park area. 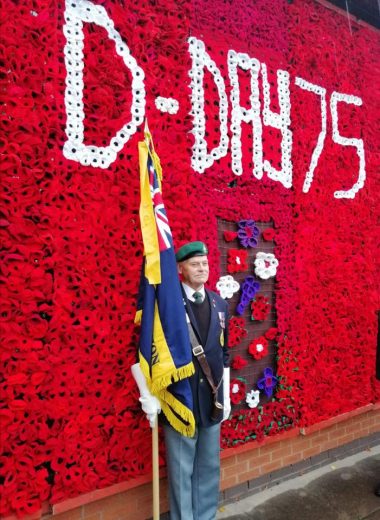 “The whole project represents a lot of people getting involved with the making of the poppies, then hours of attaching them to netting and framework made by some strong men who weren’t adverse to climbing ladders,” added Brenda.

The poppies went on display on October 23 and were recognised by the town’s Royal British Legion on October 26 at the official launch of this year’s Bromsgrove Poppy Appeal.

This Sunday, November 10, Bromsgrove’s annual Remembrance parade and service will take place in the town.

Organisations taking part will muster at 10.30am on November 10 outside Argos ready to move off at 10.40am.

The parade, led by police and church representatives, will journey down the High Street, giving an eyes left at the Odd Fellows Memorial, before progressing down Church Street, across Market Street and to the monument on Crown Close.

The service will start at 10.55am with the Act of Remembrance at 11am.

The road will be closed for the duration of the service.

Organisations will lay their wreaths at the monument and the service should end at 11.45am.

A short service of prayer will be held at St John’s Church at midday where two blank wreaths will be placed on the First World War and Boer War Memorials inside the church before a poem is read and a blessing takes place.

Organisations wanting to take part in the parade should email Bromsgrove Royal British Legion chairman Patrick Smith at patrick.smith@uwclub.net or by calling him on 07949 789841.