Bromsgrove Wildlife Heroes recognised for helping nature in their area

THREE people from Bromsgrove have been awarded prestigious awards by the Worcestershire Wildlife Trust for the help they have given to nature.

Among them were Richard Hare, the head groundsman at Bromsgrove School, Poppy Elwell and Chris Potter. 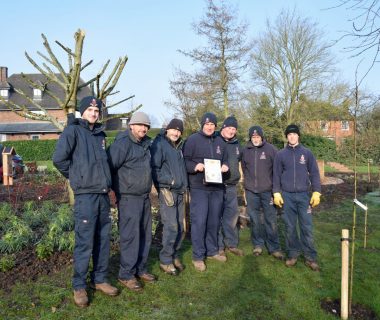 During the last five years Bromsgrove School has planted an orchard boasting 50 different Midlands-based varieties of fruit tree, introduced wildlife meadows across all school sites and planted a large number of trees and hedges.

The school has also left manicured lawns, introduced a bee-keeping club with an on-site beehive and the Prep School is currently building the wildlife friendly garden so that it runs into the new car park development, which is to be built in the summer.

As a department, the ground team works with the Prep School Eco Committee and Gardening Club who recently planted hawthorn, rowan, cherry and silver birch saplings in the Forest School area.

One pupil said they were hopeful the trees would encourage even more birds into Forest School.

Richard added: “Our aim is to make any new planting schemes as wildlife friendly as possible.

“The School gardeners are all very passionate about improving the habitat for wildlife in and around all of the school sites.

“It is a great environment in which to work.”

Nine-year-old Poppy who regularly stays with her grandparents in Hanbury has been ecologically minded from a very early age.

When pushed around the park in her pushchair she would spot discarded cans for her grandparents to pick up.

Now she is part of her school’s Eco Council and has produced her own posters on environmental issues to display in the school.

Poppy also visits other classes in the school to talk to pupils, encouraging them to be more eco-conscious.

Last Christmas Poppy asked Santa for a litter picker and declined a bag of reindeer food as she was unsure if the glitter in it was biodegradable.

She takes the litter picker whenever she visits her grandparents’ cottage and goes litter-picking in the woods.

A WWT spokesperson said: “She is an inspiration to other young people, encouraging them to take a more active role in conserving their local environment.”

And Chris uses his woodwork skills and spare time to build homes for wildlife, including hedgehog boxes, bird boxes, bug boxes, bee hotels and bird tables. He donates his creations to the Worcestershire Wildlife Trust where they are made available for people to buy.

So far more than £2,000 has been raised from the sale of ‘Chris’ Creature Comforts’.

A WWT spokesperson said: “The time, effort and care that Chris puts into making these products is incredible, and it’s lovely to think of the difference they are making for wildlife across the county.” 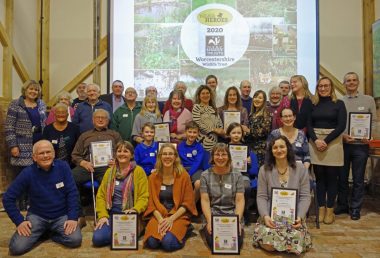 There were 31 people recoginsed at the awards at the trust’s headquarters at Lower Smite Farm.

Event organiser Sadie Carr Simons said: “It was an absolute delight to meet so many people who are doing important things for wildlife where they live.

“This is the third awards ceremony that we’ve held and, with the backdrop of significant declines in our wildlife, it’s so heartening to see that so many people care enough to take positive action to help.”

Wildlife Heroes was launched by the trust in 2018 to celebrate its 50th birthday. More than 95 individuals, groups, schools, communities and businesses have received accolades for helping the wildlife in their local area.

Sadie added “We’d like to say a big thank you to everyone who has taken time to nominate their Wildlife Heroes as well as a huge thank you to the Heroes themselves.

“Our Heroes are an inspiration to us all – they go out of their way to help wildlife right across the county but, most importantly of all, they’re doing their bit in their own communities, helping to spread ideas for everyone to get involved in caring for our planet.

“We’d encourage everyone who reads this to think about who’s doing great things for wildlife in their area. Nominations remain open and we’d love to hear about more Wildlife Heroes.”

Sadie and three Wildlife Heroes – from 2018, 2019 and 2020 – joined us for the Bromsgrove Standard Podcast. Click below to listen on YouTube.

Call Sadie on 01905 754919, email her at sadie@worcestershirewildlifetrust.org visit worcswildlifetrust.co.uk/wildlife-heroes for more on the awards or to nominate someone for a future accolade.