A SELECTION of new Bromsgrove shop displays have been unveiled at the Norton Collection Museum, depicting how they would have looked at the start of the 1900s.

MP Sajid Javid paid the venue a visit to cut the ribbon on the four additions.

One display – on Goff’s Cycle and Gun Maker – features the original sign which hung on the shop in Worcester Road in 1896. 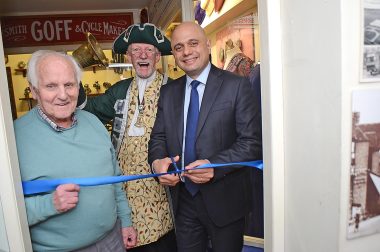 Dennis said: “Because both bikes and guns were made by people with engineering backgrounds it was quite common to combine the two trades.”

Other displays include Luve’s – high class women’s fashion – which occupied the building that now houses the Slug and Lettuce, Parry’s gents’ outfitters on the Worcester Road and a music shop, also in 1896.

Dennis added: “All four of the shops have been furnished and fitted out with items that were created in Bromsgrove or would have been on display in the stores at the time.

“For example, in the cycle shop we have two bikes built in Bromsgrove by Powell’s.

“It is thanks to the collection which I have been building up over the years and is stored in the council’s depot that we can easily fill these displays with authentic items.”

The museum’s shop displays are now up to 17, offering visitors an insight into the kind of businesses that would have been in the town and what they would have sold.