BROMSGROVE MP Sajid Javid has confirmed he will be standing in the race to become leader of both the Conservative Party and the new Prime Minister of the UK.

Mr Javid resigned from his role of Secretary of State for Health and Social Care on Tuesday, stating that he had lost confidence in the PM and ‘could not continue in good conscience’. Just minutes later, Chancellor Rishi Sunak also announced that he had quit.

In the days and nights that followed, more ministers resigned and copious backbenchers called on Mr Johnson to step down.

Mr Javid was tipped to run for the top job in his party and the country but he had initially remained tight-lipped while others threw their hats into the ring.

In a statement to The Standard this morning, Mr Javid said: “I’m running to be the leader of the Conservative Party and to be the future Prime Minister.

“I’m the candidate with the experience and the plan to lead our country through these challenging times and towards a brighter future.”

And Mr Javid, who has also been Chancellor and Home Secretary as well as the Secretary of State for Health and Social Care, thanked the people of Bromsgrove for getting him where he is today.

“The support of my constituents is incredibly important to me and I want to thank everyone locally for their kind messages of support.

“These are challenging times and it is critical we have a Prime Minister with a clear plan to ease the cost of living, boost growth and renew our shared values.

“I look forward to further conversations and colleagues about my campaign in the coming days.”

We reported on this week’s front page that Mr Javid was likely to stand. He finished fourth in the leadership race when Mr Johnson was elected. 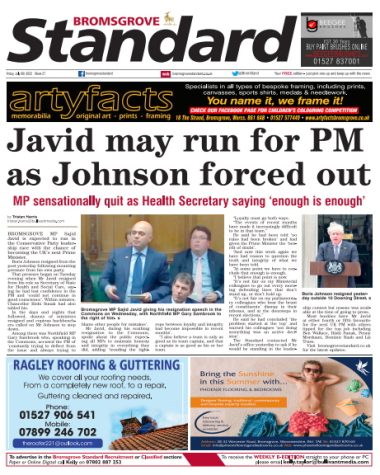 There had been reports in the national media that Mr Sunak had asked Mr Javid to stand aside and be part of his leadership challenge.

Ben Wallace is reported to have ruled himself out and Liz Truss is expected to join the race.

So how does the Conservative leadership election work?

Each candidate must secure the support of eight members of the Conservative Party to stand.

At the end of the first round, any candidates with fewer than 18 votes will be eliminated.

After the second round, any candidate with less than 36 votes will be out of the race. If they all get 36 votes or more, the one with the least votes is eliminated.

This format continues until there is just two left and that is put to a postal vote of all Conservative members with the winner of that becoming leader of the party and the UK Prime Minister.

The Conservatives’ 1922 Committee are set to reveal the timescale for the leadership race tomorrow.