IT WAS A very different Remembrance Sunday in Bromsgrove with a much scaled-back service at the War Monument in Crown Close.

The advice from the Royal British Legion was for people to stay at home and remember from their front doorsteps.

It was thanks to those people who heeded the advice that those who did attend – some 200 people – and the large amount of space around the monument enabled social distancing. 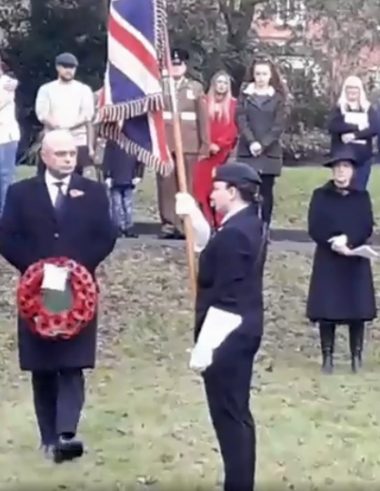 Bromsgrove Royal British Legion chairman Patrick Smith said: “We did everything we could to make it as safe as it possibly could be.”

QR Codes were placed on trees so people could ‘check-in’ with the Covid-19 app, in line with Government guidance, risk assessments were carried out and West Mercia Police officers also attended.

“In these strange times it was nice to see people coming out to remember, whilst maintaining social distancing.”

This year’s event was very much in contrast to the one 12 months ago when there was the longest ever Remembrance Sunday parade the town had ever seen.

The 2020 service itself began with a piper and was led by Rev Ray Khan. 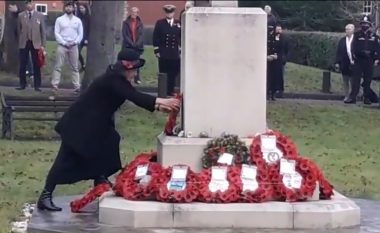 Following The Kohima Epitaph, three wreaths were laid – one by Patrick for the people of Bromsgrove, one by MP Sajid Javid who was representing the UK Government and one by Deputy Lord Lieutenant Patricia Bradbury on behalf of The Queen.

Many organisations had laid their wreaths in the days leading up to Remembrance Sunday while others laid theirs after the service had concluded.

A montage of a variety of groups and individuals laying wreaths can be seen in the YouTube video at the top of this story, created by Bromsgrove District Council.

As the crowds dispersed there were 29 wreaths in total at the foot of the monument. 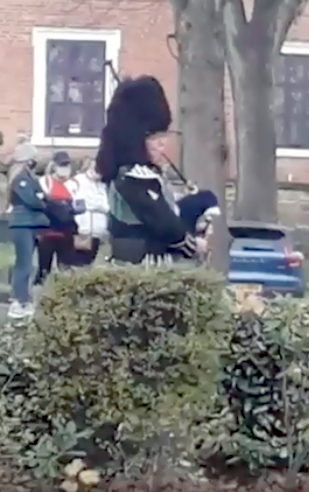 Mr Javid said: “I think it was a very moving service for everyone who came today – very fitting for these times we are living in.

“Everyone had the opportunity to reflect and lay a wreath and the bag pipes and the birdsong in the background epitomised the mood.

“It is important we never forget the sacrifices made by so many so we can enjoy the freedoms we have today.”

Ms Bradbury added: “I thought it was splendid – people were very respectful of each other and kept their distance.

“It is so important we remember those who gave so much.

“It was also fantastic we had the support from the local police and the bugle playing and piper playing was fantastic.”

Rev Khan apologised for technical difficulties with the church’s live stream and added he wanted to thank everyone – both those who stayed at home and those who did attend which ensured smaller numbers and everyone was socially distanced more easily.

“This year was made more difficult to plan not just because of Covid but also by the ever-changing regulations we faced.

“We appreciate all that the people of Bromsgrove did to remember.

“Thank you to everyone who made this time of remembrance special and safe.

“To all who remembered at their doorways, who laid wreaths before the Sunday, those who displayed poppies around the town and the veterans and service personnel who gathered on Sunday.

“I also want to remind people to stay safe.”