Bromsgrove District Plan voted through to the next stage

THE BROMSGROVE District Plan (BDP) has progressed to the next stage after it was voted through at last night’s full district council meeting.

And on Monday, September 30, a ‘call for sites’ will be launched inviting landowners to submit potential sites for developments.

That consultation, along with one where residents can have their say on the plan, will run until November 11.

Two councillors – independent Sue Baxter and Liberal Democrat Rob Hunter – called for the consultation period to be extended from six weeks to 12.

Coun Sue Baxter said: “This is the most important piece of work this council will be undertaking and I don’t think a six-week delay will make any difference.”

Coun Adam Kent, Bromsgrove District Council’s cabinet member responsible for planning, said it was a ‘live document’ and views of residents, community groups and parish councils could constantly be taken into account as the plan progressed.

He added without a time limit, decisions would never be taken and the process would go on and on and allayed fears by adding it was the officers, who were tasked with delivering the process, who had set the limit.

An amendment put forward for the time extension was defeated by 15 votes (Conservative councillors, including the chairman with the casting vote) to 14 (Labour, Liberal Democrats and independents).

The original motion then went through with the same numbers.

Included in the plan was more than 3,500 responses from residents, landowners, statutory bodies and other interested parties collected during an ‘issues and options’ consultation held last year.

The BDP maps out the district’s aims and aspirations between 2023 and 2040.

According to calculations, using the Government’s designated formula, the number of homes being built will need to be at least 6,443, meaning 379 will have to be constructed each year up until 2040.

The sites’ viability will be determined not only by whether sustainable housing can be built but also by elements such as accessibility and other infrastructure factors, including the road network, public transport, GP surgeries and healthcare provision and school capacity.

Also included in the local plan will be land for employment with the emphasis on cutting travel time for people living in the district. 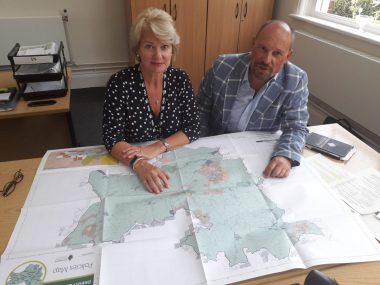 Currently, 89 per cent of Bromsgrove district is green belt – both greenfield and brownfield sites. But unlike some other areas, said officers, not much of that land was brownfield which is why the ‘rolling back’ of green belt and greenfield land was necessary.

But Coun Luke Mallett said: “If you rule out building on green belt land around large and small settlements the only areas we have left will be miles away from everything and won’t be sustainable anyway.”

Once the call for sites ends the plots will be assessed and listed in order of preference with regard to sustainability.

A consultation will then be held on the preferred options and then the pre-submission Bromsgrove District Plan will then be prepared with the proposal and representations put to the Planning Inspectorate.

After examining it the Planning Inspectorate will complete a report and send it to the council so it can be adopted.

The whole process is expected to take five years.

Coun Adam Kent joined us on this week’s Standard Podcast to talk about the Bromsgrove District Plan.