BROMSGROVE Coronation Street fans were cock-a-hoop last night when the town was mentioned in the popular soap.

Character Todd announced he was leaving, declaring he was off to a new job in Bromsgrove.

People and groups from the district took to social media with several comments on Twitter.

Roz Laws added: “Bromsgrove! Love how everyone in #corrie ends up in the Midlands. Makes a change from Birmingham.”

The Bromsgrove Society tweeted: “Congratulations Todd from @itvcorrie on the job offer in Bromsgrove.

“We loved the name-checks and that Eileen and Billy didn’t ask, ‘Where’s that?’

“We remember years ago when Curly left a day early for a conference, so he could visit friends in Bromsgrove on the way there.” 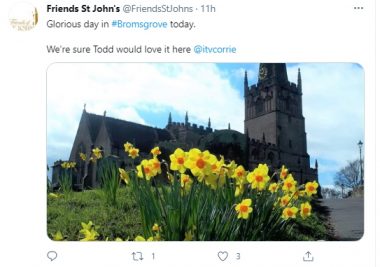 And the Friends of St John’s posted a picture of the historic church with some daffodils, adding: “Glorious day in #Bromsgrove today.

“We’re sure Todd would love it here @itvcorrie.”

Last January there was much excitement among the town’s Dr Who fans when it was revealed the baddie in the first episode of the new series – played by Sir Lenny Henry – came from Bromsgrove.