Bromsgrove community comes together to Remember Srebrenica - The Bromsgrove Standard

A CALL for everyone to unite against hatred was made as the Bromsgrove community came together to mark the 25th anniversary of the Srebrenica genocide.

The atrocity was the worst on European soil since the Second World War and saw more than 8,000 Muslim men and boys murdered because of their religious identity. 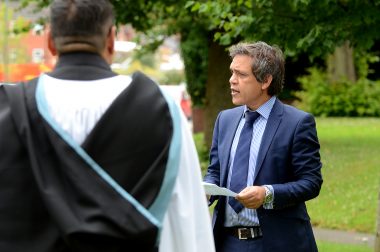 Among them was Helal Shahid from the Bromsgrove Muslim Community Trust and Chair of the Remembering Srebrenica Worcestershire Branch, district council chairman Coun Rod Laight and leader Coun Karen May and Rev Ray Khan, the vicar of St John’s Church. 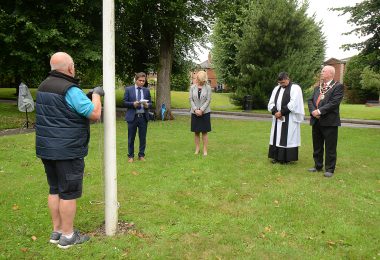 Prayers were given, the Union Flag was raised and statement was read out about the genocide, vowing never to forget about the atrocity.

It reaffirmed the district’s commitment to standing up against all forms of hatred and prejudice that targets groups based on their religion, ethnicity, gender, sexuality or any type of difference.

This year’s theme ‘Every Action Matters’ encouraged every person to reflect on their own behaviour and choices they make.

It was aimed at demonstrating, however insignificant, every action mattered either positively or negatively and everyone who stood up and united against hatred could make a difference in the fight against prejudice. 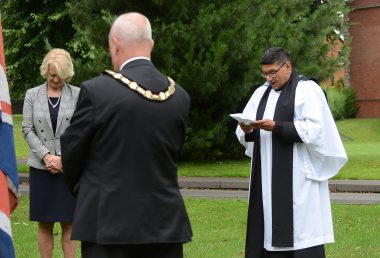 Bromsgrove’s socially-distanced service was one of thousands of events held during Srebrenica Memorial Week which runs from July 5 to 12.

Since its creation in 2013 Remembering Srebrenica – a charitable organisation funded by the Ministry of Housing,

Communities and Local Government and supported – has educated 100,000 young people on the lessons from the genocide.

It has also organised close to 7,500 memorial events and activities right across the country and created 1,450 community champions who pledge to stand up to hatred and intolerance in their own areas.