BROMSGROVE-based charity Libby Mae’s Little Angels helped spread a whole lot of love and festive cheer by delivering hundreds of presents to Neonatal Units throughout The Midlands in the run up to Christmas.

On Friday, founders Charlotte and Rich Sharratt along with their little boy Riley were joined by Miss Birmingham 2018 Amy Jones and visited City Hospital, Walsall Manor, New Cross in Wolverhampton and Russell’s Hall in Dudley giving a gift bag to every parent and baby on the units.

The parents were so grateful and for most of the babies it was their very first visit from Santa.

Then on Saturday, Charlotte, Rich and Riley were joined by Miss West Midlands 2018 Niamh Conway and Libby Mae’s auntie and charity trustee Sarah. 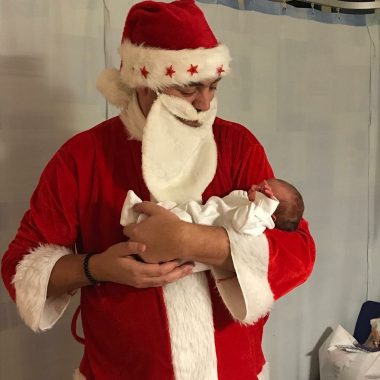 Another four hospitals were visited on that day with gifts given to every baby and parent at Good Hope in Sutton Coldfield, Heartlands Hospital, Birmingham Women’s and the Worcestershire Royal.

At Worcester babies on Transitional Care and in the delivery rooms were also given treats.

Charlotte said: “We’ve received some amazing feedback from parents and staff on the units.

“It makes us extremely proud seeing the joy we bring.

“The smiles on parents’ faces when they’re going through such a worrying time is priceless.”

The charity had several gifts donated and also purchased gifts.  A total of 175 gift bags were delivered over the two days.