RESIDENTS at a Bromsgrove care home can relive the thrill of cycling after it won a specially-adapted bike, writes Kate Duffy.

This involved three employees from Care UK, which runs the home, cycling 800 miles from Poole to Aberdeen to raise cash for the Care Workers Charity, Alzheimer’s Society and Alzheimer Scotland. 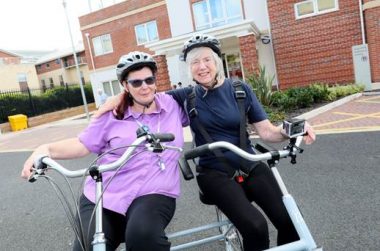 The trio brought with them the ‘supported cycle’ bike which two people to ride side-by-side, with only one rider having to pedal.

It stopped off for taster sessions so residents could reminisce over their cycling days but now Chandler Court has been awarded its very own ‘supported cycle’ for winning the best decorated bike competition.

Youngsters from Castle Nursery, who visited the home during the fund-raiser, also returned for the bike’s handover.

Joanne Gill, Chandler Court’s home manager, said: “This fantastic piece of equipment is going to bring such joy to residents, by making cycling accessible and creating a physically and mentally stimulating activity.”