Bromsgrove Bear is launched into space for science project

A TEDDY bear from Bromsgrove School has been launched into space as part of a science topic.

Bromsgrove Bear, who was kitted out in his very own school jumper, was strapped to a large balloon filled with helium.

After a very excited countdown by the children he began his journey.

Prior to his voyage a team from ‘Sent Into Space’ charted conditions to map out where the bear would land on his descent, within a 5km to 10km radius.

The flight path itself had the potential to change with the weather, from one day to the next and if the team could not adjust the flight on a particular day to avoid restricted airspaces, or urban areas, they did not launch.

He travelled between 10mph and 15.6mph on the way up with a slight increase in speed as the balloon reached the stratosphere.

As air resistance decreased the balloon reached its peak altitude before it burst and Bromsgrove Bear began his descent.

The flight up lasted between two hours and 15 minutes and three hours and the return was between 45 minutes to an hour.

Bear finally landed south-east of Northampton, some 60 miles from Bromsgrove and the pupils were very relieved to hear that the bear had descended safely. 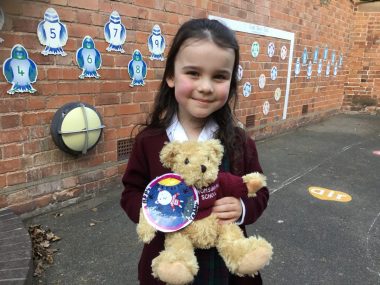 One parent said: “That’s all we’ve heard about all evening.

“Our daughter was very concerned he would be lost in space.”

Another said: “Our son was so excited, he’s really enjoyed this topic.”

The children were able to track Bromsgrove Bear during his journey and printed out maps to see where it had landed.

They thanked Sent Into Space for collecting him and letting the children know he had landed safely.

In June 2015 Dylan and Oscar Rees, with the help of their dad Oliver, sent another bear from the town, called ‘Uranus’, into space.