A SPARKLING and ‘Bright’ Bromsgrove couple have celebrated their diamond wedding anniversary today.

Harry and Patricia Bright, who were both born in Perry Barr, Birmingham and are both 79, tied the knot at Our Lady and St Rose of Lima, Weoley Castle, on January 6, 1960. 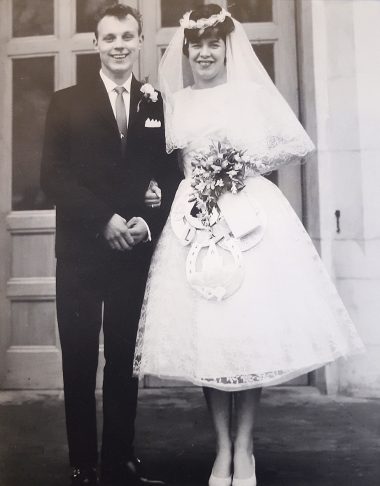 They honeymooned in Rhyl, north Wales, and holidays have always been a big part of their life – they have been members of the Caravan and Camping Club since 1978 and try to get away most weekend.

After their wedding and honeymoon, Harry and Pat had just £10 left between them.

The pair met when they were both 17 – Pat was living in Winson Green and Harry – a plumber by trade – visited the house to carry out some work.

Their first date was at the Bristol Cinema in Birmingham.

Harry later gave up plumbing to work at MG Rover and Pat was a production worker at Harris Brush for 12 years and, prior tot hat, a domestic at Rubery Hill Hospital.

They first lived together in Harborne and at two properties in Rubery, where they bought their first house.

The pair, who live in Stoke Prior, finally settled in Bromsgrove in 1985, choosing their home as it was what they could afford and was on a bus route because Harry did not have a car at the time and needed to commute to work.

They celebrated with their family and friends – including one of their sons who journeyed down from Scotland – on Sunday.

And this evening the couple will be having a nice meal out together.

On the secret of a long marriage, Pat said: “Understanding, give and take and talking things through.

“Trust is also a big thing and you need to be patient with each other.

“We have also never argued in front of the children.”