A BARNT Green restaurant is banned from selling alcohol after breaching lockdown regulations by serving food and drink to customers on the premises.

And the Hewell Road restaurant could also face a £1,000 fixed penalty notice for the rule-break.

Police said there were a number of customers eating and drinking inside when they visited on Friday, November 20 after a tip-off.

Staff were also not wearing face coverings and Mr Hussain was allegedly seen frantically trying to clear the tables when officers arrived.

Officers, wearing body-cams, said one man was ‘extremely intoxicated’ but he denied this.

In a report put before the Sub-Committee, officers stated they knew the man was drunk because his ‘eyes were glazed, his words slurred and he kept dropping his belongings’.

One customer was said to have uttered profanity on his way out of the building after police ordered those still in the restaurant to leave. 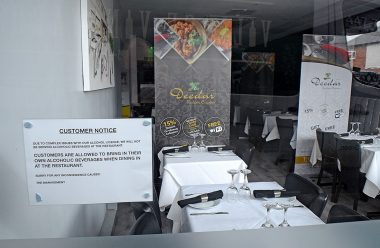 A note on the door says the restaurant will continue to allow alcohol to be brought in.

PC Bednall returned to Mr Hussain and asked him to tell the truth as he ‘did not like being lied to’.

Superintendent Mark Colquhoun of West Mercia Police said: “The actions taken by this premise in deciding to open and inadequacies in implementing risk mitigation have placed an unnecessary risk to the health of individuals, families and local communities at a time when the country is experiencing a national emergency.

“The risk of transmission of Covid-19 and the failure to follow established guidelines represents a public nuisance which is a serious crime.”

Bromsgrove Councillor Margaret Sherrey added that ignorance of the law is not an excuse.