AUTHOR of the Jack Castle series Philip Caine will be at Bromsgrove Library between 7pm and 8.30pm on Wednesday, April 17 to talk about the adventure novels, writes Mollie Evans.

Born in 1950, Philip travelled the world for 30 years working in the oil industry.

In 2003, the author started working for the American coalition and spent seven years in post-war Baghdad.

However the last three years were spent in Dubai where Philip ran an oil service company. 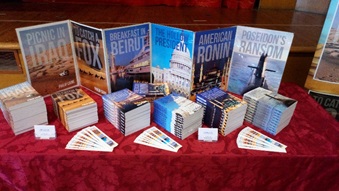 After his retirement in 2015 he devoted his time to public speaking and writing his six adventure thrillers which are influenced by the time he spent in the Middle East.

Tickets cost £3 and are available via email at bromsgrovelib@worcestershire.gov.uk or in person from Bromsgrove Library.