PARENTS of a South Bromsgrove High School pupil with severe idiopathic scoliosis have less than two months to raise £81,283 for their daughter’s spine surgery.

It’s a race against time for Bordesley residents Lisa and Carl Hart, who are doing everything they can to make sure their sporty daughter Amelia, aged 15, continues to play football and has a good quality of life.

More than £10,000 has been raised in 20 days after a Go Fund Me page was set up to spread awareness about their daughter’s condition.

Lisa said: “Amelia has an abnormal curvature of the spine and we don’t have much time to correct it.

“We need to raise the funds urgently for private and innovative spinal surgery, known as Vertebral Body Tethering, not currently available on the NHS.

“If we are successful it would preserve her lungs and breathing, as well as her growth, flexibility and ensure she has a pain-free future.

“We have reached the stage where doing nothing is simply not an option.”

Former Aston Villa footballer Andy Gray has also thrown his support behind Amelia’s campaign which people can support by using the hashtag #Ameliakickshercurves on Twitter.

Diagnosed in November 2018, the former junior Redditch United player began to rapidly develop many of the symptoms associated with her condition.

One shoulder blade higher than the other, rib cage prominence, uneven hips, rotating spine, reduced area in the chest for the lungs to expand and chronic pain.

Her scoliosis consists of two curves, making her spine S-shaped.

The curves have a considerable amount of rotation and continue to show signs of progression.

In August, Ameilia’s consultant confirmed surgery at St George’s Hospital in London is now her only option.

If it goes ahead, surgeons would insert titanium screws into the vertebrae, using a flexible cord and tension to align the spine into a straighter position. 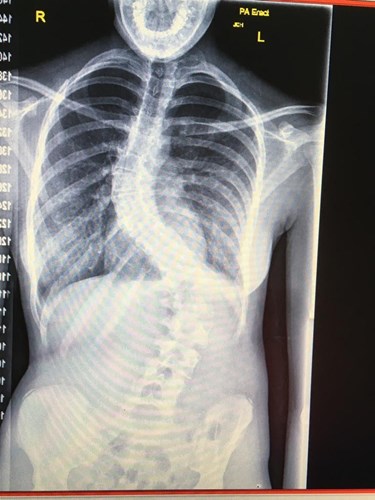 It would allow for further growth and her all-important flexibility maintained.

Lisa said: “It’s a ground-breaking procedure and the only hospital in the country to do it.

“The NHS treatment – known as spinal fusion – involves titanium rods and screws being inserted into the spine, fusing vertebrae and thereby straightening it.

“But as fusion takes place over time, this would eventually make her spine a solid structure of bone.

“Sadly it would limit further growth and more importantly, would limit the flexibility and movement of her spine which is not what a young lady who is passionate about football wants to hear.”

Lisa has set up a Parliament petition – petition.parliament.uk/petitions/273734 – to lobby the government in making Vertebral Body Tethering available on the NHS.

Amelia’s parents said they are both tremendously proud of the determination she has shown throughout managing her condition, including completing daily exercises and stretches.

“Appealing for help in this way is not an easy thing for us to do, but the clock is against us and we don’t know where else to turn.

“We can’t thank everyone enough for their support.”