MORE than 125 classic motorbikes were all revved up and ready to go at Morrisons last Sunday as part of a fund-raiser for a Bromsgrove biker who has just weeks to live.

Stu Green, who is just 49, was given the devastating diagnosis 12 weeks ago he had brain and lung tumours which are both cancerous and fast growing. 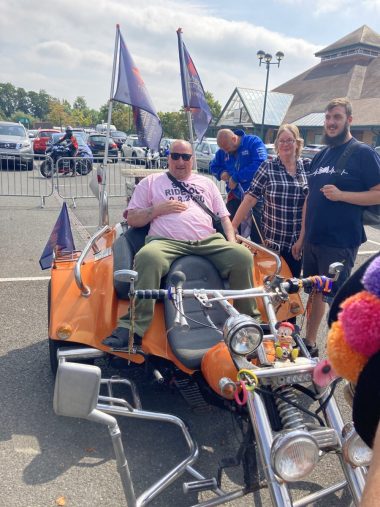 During his life Stu has always been a kind and helpful person who has gone above and beyond to help others, including the vulnerable and elderly.

It was his dying wish to ride a trike so his nephew Mitchell Carter organised Stu’s RideOut to fulfil dream and to raise £2,200 for his ‘no fuss funeral fund’.

The organisers tried several places for the ride to start but, given the number of bikes attending, struggled to find anywhere.

The 125 bikes, including Harley Davidsons, trikes and even one with a bath tub sidecar (complete with shower head) gathered and set off to Harvington, via Belbroughton, and back again. The director of Harley Davidson Birmingham was among the group.

More bikes turned around from their usual journey and joined the group, taking the total to 160 at its peak.

Stu’s sister Lisa Chapman said: “It was absolutely awesome – much better than we expected.

“I want to say a big thank you to everyone involved in organising it – without them it would not have been possible.”

She said Stu’s tumours were badly impacting on him and he was deteriorating fast.

“Stu is now on a lot of medication which also affects him a lot.

“We know it is a matter of weeks but are just hoping for as long as possible.

“As a family we’re trying to raise money to pay for a basic funeral as this is what Stu wants, Stu just wants a no fuss funeral and being apart of a small family we can’t afford much.” 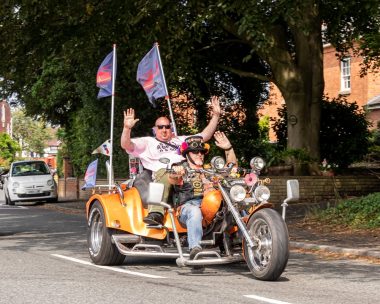 Jim added: “There was a brilliant atmosphere and to see that number of bikes leaving was a breath-taking sight.

“It was nice to be able to help someone in that situation.”

The RideOut raised £128 each for Stu’s fund, the Primrose Hospice and Cancer Research.

Profits from the photographs taken by BikerPics are also going to the fund which currently stands at almost £300.

Anyone who can boost the total further should click here.