A MUSICAL set in an office with plenty of laugh out loud moments is just what we need at the moment – especially if you have been working from home and have felt apprehensive about going back in.

The Norbury Players’ 9to5 – The Musical provided all those moments and more and if, like me, you have not watched it for a while, you will probably have forgotten just how funny it is.

The show started in lively fashion – punctuated by Dolly Parton herself on screens either side of the stage and one of the longest – and very entertaining – opening numbers you will see – title track 9to5.

We are introduced to the contrasting characters and the office setting with soon-to-be close friends Violet, Doralee and Judy and sleazy boss man Franklin Hart Jnr. 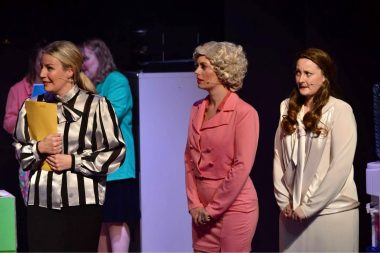 It was hard to pick out the best of the lead roles – Lou Ford played lovable newbie Judy well and had the vocal performance of the night with ‘Get Out and Stay Out’ in the second act.

Holly Hay as Doralee was excellent, with all the Dolly Parton elements – the voice, mannerisms and brash confidence we have come to know and love – you can tell she has done her homework.

And Lorna Tipple was inspiring as ambitious Violet, vying to be the first ever female CEO. She also delivered a filing cabinet full of wonderful one-liners throughout the show.

On the other side of the desk, Dean Bayliss perfectly captured every element of self-proclaimed ‘sexist, egotistical, lying, hypocritical bigot’ Hart – especially in gyrating number ‘Here for You’ with Doralee which had the audience in hysterics.

Equally hilarious was Roz Keith (Sophie Handy) performing ‘Heart to Hart’ – you will struggle to see a more passionate comedic performance this season. 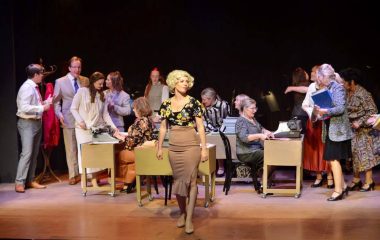 Among the other music highlights were the Let Love Grow duet between Violet and Joe (Nathan Wilde) which provided a rare touching moment and ‘Shine Like the Sun’ and ‘Change It’ where the three main female leads complemented each other vocally on these big numbers.

The supporting cast played their part and the orchestra were excellent throughout, keeping things ticking over and providing the incidental music. It was fitting they were at the back of the stage, rather than being in the usual orchestra pit, as they were able to take some well-deserved applause at eye-level with the audience at the end.

The only thing that needs tweaking is the mic volume level which needs to be louder on some of the songs, such as Cowgirl’s Revenge, as the musicians did overpower the solo.

Other than that, it is clear The Norbury Players’, orchestra and backstage team have been working overtime to deliver the intended fun, feelgood factor through this super show.

And if you are one of those ‘dragging your feet working from homers’ and watch this show over the weekend, you may just be back at your desk on Monday morning.