PUT YOUR cow-person hat and boots on, leave your inhibitions at the door and immerse yourself in two hours of froth and frivolity with this delicious heads up to female empowerment.

Getting this show straight from the West End is quite a coup for The Alex which went to town on hosting the national tour press night of Dolly Parton’s Country Rock Classic.

There were drag queens in attendance, a yellow carpet to greet you and even yellow Dolly cocktails and, of course, tubs of dolly mixtures.

The Queen of Country was there to meet the audience too – sadly not in person but via a screen which appears in the O of the huge hanging sparkly ‘9 to 5’ fly-drop.

Dolly gives us a bubbly narrative about office life in the 1970s and then it’s straight into the title song.

Good vibrations leap across the curtain line as we meet the company who dance, sing and stomp – with seemingly the whole house joining in the chorus. 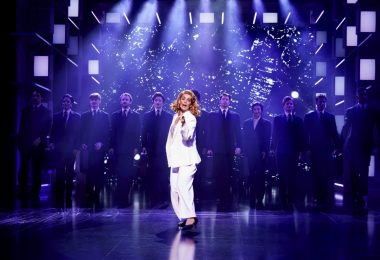 Lights encased in ancient Commodore 64 computers –hundreds of them – they form inward pointing tunnels as part of the huge kaleidoscopic set from designer Tom Rogers.

Just like the acting action, the set is fast moving and tells its own visual stories.

Homage here also to the video designer, Nina Dunn, for the most amazing moving 3D city backdrops I’ve ever seen.

The story concerns three workmates and their slimy misogynistic boss Franklin Hart Jnr – perfectly captured by Sean Needham. His philosophy which permutates throughout the company is  – men play golf, make money and tell female-ridiculing jokes – women make coffee and flash teeth and breasts for the edification of the men. 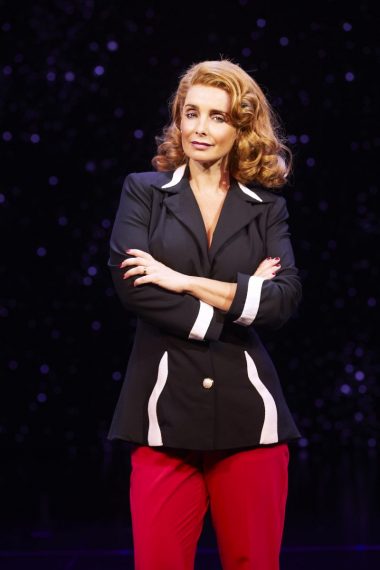 The heroines who kidnap the big bad boss, tie him up in his own S and M gear and reorganise the company along gender equality lines are Violet Newstead  – a confident and endearing Louise Redknapp, new employee and newly divorced Judy Bernly  played by Love Island winner Amber Davies showing she is much more to offer than a reality TV star and perfectly completing the trio is Georgina Castle as head secretary Dolores Rhodes – the Dolly Parton lookalike.

A special mention for Lucinda Lawrence, she is quite the scene–stealer as company dobber-in Roz Keith.

Directed to give us never a dull moment by Jeff Calhoun with stunning choreography from Lisa Stevens and a book full of humour from Patricia Resnick – plus of course music and lyrics by Dolly this is indeed a feast for the faithful.

There’s not much to think about but a great deal to enjoy and as a bonus Dolly leads the clapping from her onscreen O in the walkdown – the full house, mostly female audience exited joyously – ME TOO!