FOR TEN years, reviewers and audiences have been asked to keep the secrets of the uniquely spine tingling show ‘Ghost Stories’ – and so you’re certainly not going to get any major spoilers from me!

Since its original West End run the show has toured the world, been made into a movie and is now back here at the Alexandra Theatre in Birmingham to start a UK tour with an all new cast.

Ghost Stories was conceived as a concept and written by ‘League of Gentlemen’ originator Jeremy Dyson along with Andy Nyman, (who devises many of the Derren Brown experiences), so it is little wonder that audiences expect to go home ashen-faced and seeking solace in the company of others. ‘Best avoid dark roads and solitary railway carriages if we can’ is the communal thinking, nervous laughter hitting the night sky as we exit and wander the streets together for as long as possible. A voice unseen tells you to ‘Look straight ahead, ignore dark alleyways and corners’. 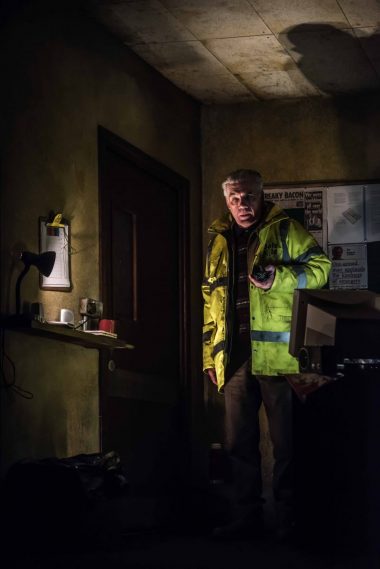 The cast is a four-hander comprising Joshua Higgott as the ghost-debunking narrator Professor Goodman, Gus Gordon as Simon Rifkind, Paul Hawkyard as Tony Matthews and Richard Sutton (who trained at Birmingham School of Acting) as Mike Priddle. Together the quartet act out a series of tales to make you literally jump out of your seat or – as in my case – for your companion to soak you in red wine.

Note I said four-hander and indeed the walkdown starts that way then in the blink of an eye there is an interloper.

That of course may not happen every night – depends what mood the spirits are in I suppose….

Ghoulies, demons, stuff of nightmares, apocalyptic chappies, headless homages to things that go thump in the night – this is a full-on haunting experience like I’ve never encountered before in the theatre.

It obviously has a huge following as it was rammed to capacity.

I’ve kept the secrets so I’m sure they’ll let me live and I would definitely encourage you all to catch the tour and do the same – but best wear an extra pair of pants.  Oh and it’s 90 minutes straight through and strictly no readmission if you have to use the rest room – hence the loo-queues before curtain up.

And it’s OK to scream by the way.