The play that's Asking for It to be talked about

‘ASKING For It’, adapted for the stage by Meadhbh McHugh in collaboration with the show’s director Annabelle Comyn from Louise O’Neill’s devastating novel, is as much a conversation starter as it is a powerful piece of theatre.

Although the play is set in Ballinatoom in West Cork, Ireland, its central theme of sexual consent is as relevant here in Birmingham (where the UK premiere took place last night at the REP) as it is anywhere in informed society. 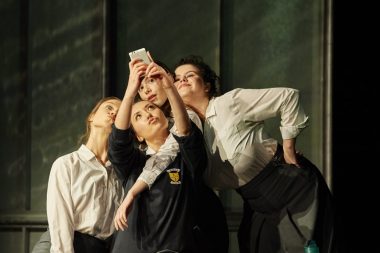 The central character of Emma is a feisty, opinionated and beautiful 18-year-old schoolgirl who is horrifically gang-raped and dehumanised by local college football heroes at a party whilst she binges on a lethal cocktail of drink and drugs. She is debased, abused, photographed and then dumped on her own doorstep to be discovered by her appalled parents.

Emma – an all-consuming powerhouse performance from Lauren Coe – tries to take legal action but rather than receiving a sympathetic reception, community and society questions how much of a victim she really is. Was she a willing participant or, as in the show’s title; ‘asking for it’? 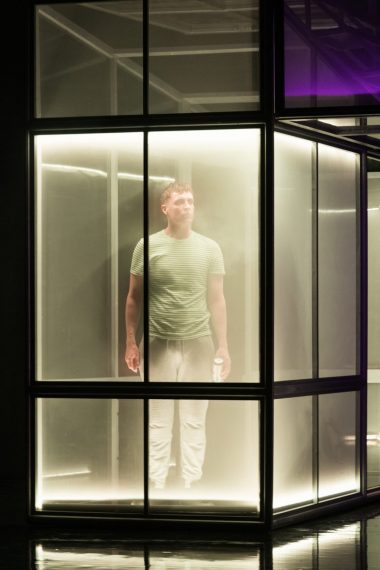 Paul O’Mahony’s quite amazing set starts off as the sparse interior side of a giant garage door – before transforming into a series of celluloid shapes to become the home, the school and the party house. It is multi-levelled and allows for giant projections as part of the storytelling.

Act one chronicles the events that lead up to the party. Piece by piece we are introduced to the nastier side of teenage angst, bravado and sarcasm. When the incident happens, the set allows it to be shown honestly and brutally without reliance on too much graphical acting; the projected implications and sounds are enough to induce total revulsion at what is occurring.

Act two opens with the set moving hydraulically to create a walled kitchen complete with a glass roof. Black rain trickles permanently down the glass and is as dark as the mood on stage as the family unit spirals into disintegration.

Dawn Bradfield oozes believability in her descent from euphoria to manic depression as Emma’s mother. Simon O’Gorman is her mild-mannered father – mild that is until he too explodes. 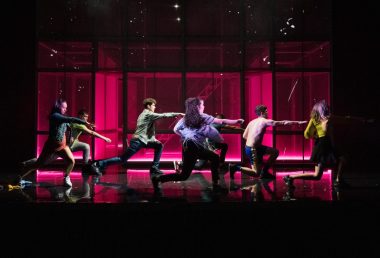 Liam Heslin dominates the second half as Emma’s brother Bryan who is the only family member that wants her to go all the way to trial – partly because he wants to save face with his own friends and partly because he feels guilty he didn’t protect her ‘that’ night.

Despite the excellence of directing and staging there is a dip of around 20 minutes in the second half, which could do with some pruning. Nothing much happens for too long. Bryan breaks the mood and from them on it once more becomes compulsive watching.

The press night audience comprised mostly those of us of the silver fox age group, which was a shame, as I believe this is a play every young person should see.

Overall the cast and creatives of this Landmark/Everyman production do a sterling job in breaking down that fourth wall twixt them and us – to the point where when it came to the walkdown, it seemed impolite to give a standing ovation. Subdued applause seemed to say much more – we were stunned into silence by what we had witnessed and ready to start those minefield conversations among ourselves on our journeys home.

Asking for It runs at The Rep until February 5.