The Killers' star is still blazing like a rebel diamond

WITH their perfect combination of indie rock ‘n’ roll bathed in warm synth sounds, The Killers boast a fully-loaded arsenal of songs that are guaranteed floor-fillers and festival anthems.

Mega hits like ‘Mr Brightside’ have streamed more than 204million times in the UK alone, while all five of their studio albums to date have hit No.1 in the charts.

Fronted by their very own Las Vegas showman and backed by a drummer I wager is the best in the world, it’s no wonder they are one of the biggest bands of the 21st century, writes James Iles.

‘K’ is for The Killers

When They Were Young

HAVING been sacked from Utah synth pop trio Blush Response, legend has it The Killers’ lead singer and synth player Brandon Flowers had an epiphany after seeing Oasis in concert. Realising he wanted to be in a rock band he responded to a Las Vegas newspaper ad by guitarist Dave Keuning.

They bonded over musical similarities and by November 2001 they had a two-track demo including ‘Mr Brightside’, the first song the pair wrote together.

Keuning and Flowers were backed by Dell Neal on bass and Matt Norcross on drums before eventually persuading Mark Stoermer to take over on bass guitar and Ronnie Vannucci Jr to be their stickman in 2002. Many witnesses at the time noted Vannucci – who gave the group discipline from the drum kit – and Stoermer, a solid musician, melded them into a great band on the Las Vegas music scene.

The four-piece would work on songs at Vannucci’s garage and use the band room at the University of Nevada to practice. During this time the tracks ‘Somebody Told Me’ and ‘Smile Like You Mean It’ were born.

The Killers, who took their name from an imaginary group in the video for New Order’s single ‘Crystal’, were catching the attention of A&R men and signed with Lizard King in the UK by 2003.

It was Radio 1’s Zane Lowe who premiered ‘Mr Brightside’ that August and the British buzz that followed got them signed to Island Records in the US. They finished recording ‘Hot Fuss’ in November, sticking to many of the original demos for the album as they had that spark of spontaneity.

The superb singles released from ‘Hot Fuss’ (2004) – ‘Mr Brightside’, ‘Somebody Told Me’, ‘All These Things That I’ve Done’ and ‘Smile Like You Mean It’ – charted respectively enough (‘Mr Brightside’ was re-released and got to No. 10, after the success of ‘Somebody Told Me’), but it was the combined force of all four that saw ‘Hot Fuss’ eventually reach No.1 in the UK album chart by January 2005.

‘Jenny Was A Friend of Mine’ was not a single but certainly had the calibre of one, especially given the brilliant bass playing by Stoermer on the critically-acclaimed track while ‘Glamorous Indie Rock & Roll’ arguably set out The Killers’ manifesto for global music domination.

The band embraced the power of the music video with frontman Flowers proving a more than able star turn for the cameras. The second video for ‘Mr Brightside’, starring Eric Roberts as a love rival, was a brilliant pastiche of Baz Luhrmann’s ‘Moulin Rouge!’ movie.

Awards from MTV, the NME, Rolling Stone magazine, Grammy nominations and a successful world tour followed, including playing Live 8 in July, and, by the end of 2005, the group secured a powerful mandate from critics and fans.

While Flowers leads from the front with all the swagger of Dave Gahan, let’s not forget the great rhythm unit behind him and axeman Keuning of Stoermer and Vannucci.

A scholar of jazz drumming techniques, stickman Vannucci’s energetic sixteenths that sizzle and simmer on the hi-hats

are a hallmark of The Killers’ sound, and, perched on a high stool, his showman playing is major spectacle of the group’s live shows. 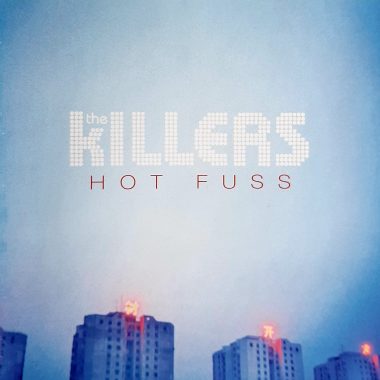 ‘One of the best albums of the past 20 years’ was how Brandon Flowers boldly described their hotly-anticipated follow up LP ‘Sam’s Town’ (2006), which was produced by Alan Moulder and Flood of U2 and Depeche Mode fame.

‘When You Were Young’ was the lead-off single and certainly set the stall out that The Killers were not just a one album wonder, peaking at No. 2 in the UK.

The album went five times platinum in the UK with follow-up singles ‘Bones’ and ‘Read My Mind’ (which included a remix by Flowers’ heroes Pet Shop Boys) also hitting the top 20.

‘Sam’s Town’ won ‘Best International Album’ at The Brits and the world tour that followed included arenas and Madison Square Garden, before headlining Glastonbury in the summer of 2007.

The Killers’ third studio album ‘Day & Age’ (2008) was produced by Stuart Price. It was preceded by the No.3 hit single ‘Human’ with that lyric ‘Are we human, or are we dancer?’ confusing listeners, despite Flowers explaining it was inspired by a Hunter S. Thompson quote about America being a generation of dancers.

‘Spaceman’ followed and was a huge radio hit. By the time they toured the LP around the world they were able to sell out a residency at the Royal Albert Hall in July of 2009, which was recorded for a live DVD.

By 2010, after six years on the road and having attained global fame and acclaim, The Killers announced a hiatus.

Brandon Flowers has enjoyed solo success in between working with The Killers on his albums ‘Flamingo’ (2010) which was a No.1 with the brilliant ‘Crossfire’ single. He also topped the LP charts with ‘The Desired Effect’ in 2015. That album contained ‘Can’t Deny My Love’ and ‘I Can Change’, which highlighted his talents away from the group.

The Killers returned with album four ‘Battle Born’ (2012), which was another No.1 LP and led to their most widespread tour so far, even performing in Russia and China. It culminated in their biggest show yet, playing to 90,000 at Wembley Stadium.

A ‘best of’ compilation ‘Direct Hits’ (2013) perfectly captured the radio-friendly accessibility of The Killers and contained two new songs – ‘Shot at the Night’ and ‘Just Another Girl’, the latter being one of my favourite singles. The video starred Glee actor Dianna Agron, reprising scenes from the group’s famous hit songs.

Bass player Mark Stoermer announced he was taking a break from touring around this time, but would remain part of the band and has since played with them on one-off gigs.

He did however record with them on 2017’s Jacknife Lee-produced ‘Wonderful Wonderful’, their fifth No.1 album in the UK, which was preceded by the globally acclaimed single ‘The Man’ with a humorous video that sees Brandon Flowers playing all of a gambler, playboy and a karaoke singer, all linked by an obsession with ego and fame.

Neither Stoermer or guitarist Dave Keuning toured with the group on the following dates but, while the latter is also now on a hiatus, the pair still remain official members of the group.

The Killers have sold more than 28million albums since bursting on to the scene in 2003, performing in more than 50 countries over 17 years.

They are still as popular as ever so it’s not surprising they were once again the headline act at Glastonbury last summer, with great cameos from both Johnny Marr and Pet Shop Boys.

The band have also have performed or recorded with everyone from New Order to Mark Knopfler and from Bruce Springsteen to U2. Indeed promotional single ‘Caution’ from upcoming sixth studio album ‘Imploding the Mirage’ features a Lindsey Buckingham guitar solo.

The LP is another highly-anticipated release from The Killers who are now established as one of the biggest bands in the world, guaranteed to fill stadiums and unite the masses at festivals with their anthemic back catalogue of music.

My top The Killers tracks

• Check out James’ ‘K is for The Killers’ playlist on Spotify at shorturl.at/tLQRW