I loved it then and think that with the few new tweaks that have been added and with this current cast it’s even better.

Confession – I’m a fan of most things French – their cuisine, their film noir and their biting theatrical satire. 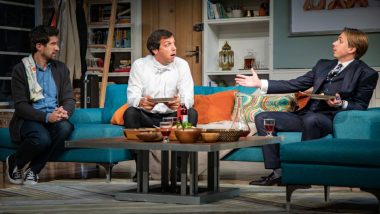 Regarding the later, playwriting duo– Alexandre de la Patellière and Matthieu Delaporte have proved themselves kingpins for a modern age.

‘What’s In a Name’ was their first play to be translated into English.

Adapted and directed by the legendary Jeremy Sams, it’s a ‘feast of fun’ and you can’t see the French connection – just a wonderful slice of suburban London life in meltdown.

The set by designer Francis O’Connor consists a trendy double-storied warehouse conversion in Peckham. It comes complete with exterior patio and an amazing library that doubles as a huge wall and gallery – it’s quite the perfect setting for this intelligent and emotional comedy. 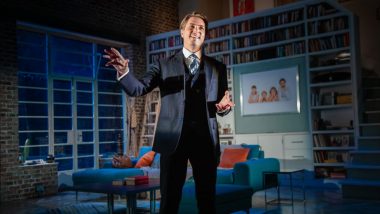 Vincent, a commanding performance from Joe Thomas, bookends the play with an opening, ‘meet the players narration’, that cleverly includes himself and a warm epilogue at the end. In between there is 90 frantic minutes of ‘name-calling’ in every sense at a dinner party from hell.

Good friends trade insults, food and blows – the cruelty and irony of which is sidesplitting fun for the audience. Yet and this is the clever bit of the writing/acting/direction, we feel passionately for and with them too.

The final speech by Elizabeth, an erupting volcano from the wonderful Emma Carter, where she tells them all to go forth and multiply is a veritable tour-de-force and received a well-deserved ovation. 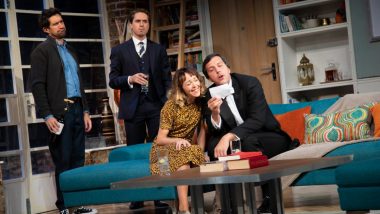 In it’s original language ‘Le Prénom’ aka What’s In A Name? was nominated for six Moliére awards, should get a few here too.

Catch it if you can – I can’t recommend it highly enough and ignore any buffoons in the audience bedecked in face masks like there was on press night – laughter is the only thing contagious on offer at the Alex.

What’s in a Name? runs at Birmingham’s Alexandra Theatre until Saturday, March 14.