HAMLET is probably Shakespeare’s most performed play – I’ve lost count of the number of productions I’ve seen over the years and – as I read in his programme notes – this is Michael Barry’s third trip to Denmark as director. 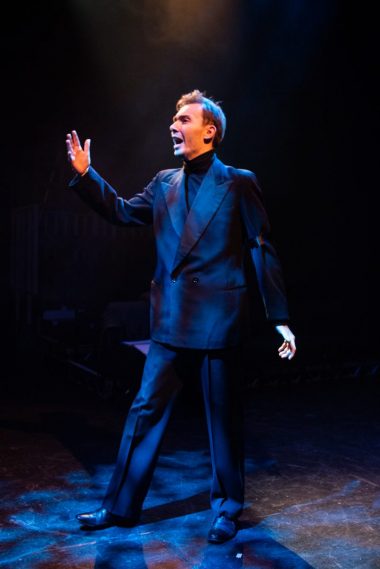 As it is also Shakespeare’s most quoted play, let me start with a misquote: ‘There’s nothing rotten about this Barry Film-Noir vision’. It works well and mainly because his Hamlet, a pulled back, thoughtful performance from one of the Crescent’s top guns Jack Hobbis, bares quite a resemblance to 50s iconic bad boy James Dean.

I was truly expecting him to appear in a turned-up collared leather jacket with a Marlborough cigarette hanging from his lower lip at some point. Like in Dean’s ‘Rebel Without a Cause’, Hobbis’s ‘less-is-more’ approach makes for a real-deal charismatic Prince.

There is no set designer to credit as there is just an open nebulous space in a traverse setting where the audience sit facing each other like opposing fans. Pre-curtain I was tempted to shout: “Come on everybody let’s storm the castle” but resisted. 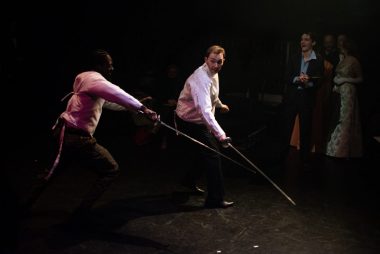 Lighting designer John Gray uses the void to create clever, often mysterious, sometimes luscious spaces in which the company unfold the story of this doomed Scandi-dynasty.

Barry’s vision, embraced by his creatives is not of a country at war – whilst it may certainly not be at peace, it calls for the psychiatrist’s chair more than the executioners axe. Quite rightly – for as well as having the highest suicide rate in Europe, the Scandinavians are renowned for self-flagellation. 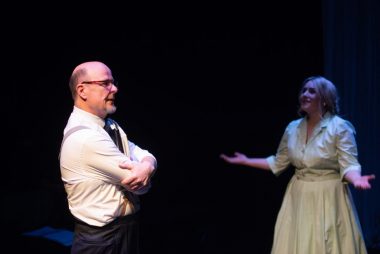 The company gives all-round competent performances and there are some excellent outings. Femke Witney is the best Ophelia I have ever seen and her final descent into madness is a jaw-dropper. Isabel Swift as Hamlet’s best mate Horatio has a clever female-football-pundit feel about it – bringing a smile amidst the darkness, Skye Witney skillfully delivers dignity first and majesty second as Gertrude and Robert Laird is both commanding and riveting as a rightly one-dimensional Claudius.

There was some clumsy staging – it was frustrating to have Hamlets first entrance and speech completely masked – however, the closeness of the action from that point on was all embracing and we became more participants than observers.

In this reduction, every classic line is still there and well delivered.  Thanks to some excellent scissor work on the text by the talented Mr. Barry the story is cleared of clutter.

‘Brevity is the source of wit’ indeed but it also brings us to the walkdown before numbness in the nether regions has set in.

The show runs until Saturday, March 7.