ALL THAT was needed was a rainbow to appear over the terrace at Malvern Theatres for Jon Brittain’s Olivier winning production of ‘Rotterdam’ and the evening would have been complete. As it was, this play has everything needed to bring a smile and shed a tear to take away the relentless talk of Brexit.

You could be forgiven for thinking that a show with transgender identity at its core is going to be more of a cerebral essay than a glorious romp – but not a bit of it. It explores and explains with such wonderful wit that you feel you are in the presence of theatrical glory.

Rebecca Banatvla plays lesbian Alice who is in a relationship with Fiona (Lucy Jane Parkinson). Fiona is the sister of Josh (Paul Heath) – Alice’s former partner who and lives quite happily in a house in Rotterdam with them both. 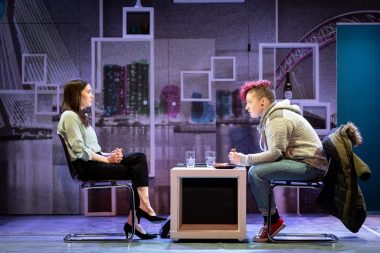 Alice wants to email her parents and tell them she has ‘come out’ without shocking them too much. Fiona puts a spanner in the works by making her own announcement that she feels she is really a man and is starting the transitioning process.

This is not what Alice wants at all – she wants a full-on lesbian relationship. Enter Lelani (Stella Taylor) as an outrageous and stunning Dutch co-worker who captivates Alice. 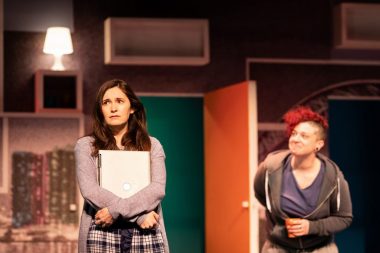 Act two sees Fiona chopping her hair, changing her clothes and dropping her voice as she releases ‘Adrian’ – her alter ego.

There you have all the elements of a bang-on up to date ’Ray Cooney’ farce with much fast moving action and a bit of bed hopping.

This company of four acts as one perfect cast – they support each other harmoniously bringing an all embracing ‘no-stars/one team’ feel that really underpins the whole message of the script. 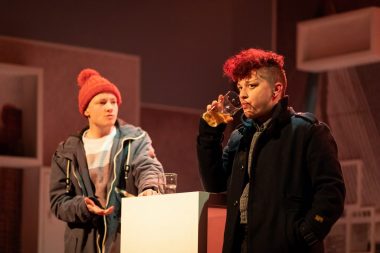 Donnacadh O’Briain has directed this piece intelligently and built layer upon layer of gentleness and challenge. Ellan Parry has created a set, which is so clever – doors becoming walls becoming bars becoming nightclub becoming canals seamlessly and right before our eyes.

This is a trendsetter in so many ways but mostly because it is makes for an evening of brilliant theatre.

The themes are suitable for those aged 14 and over.

Tonight (Saturday) is the last chance to catch it.