WHEN I went to see this very same Chicago at the Grand in Wolverhampton last year on an earlier part of the tour, I started my review with ‘The magic of theatre is that, because it’s live – you can expect the unexpected’.

That was because understudy Billie Hardy got to stand in for an indisposed Faye Brookes, to play the lead role of Roxie Hart – and very well she did too.

Last night at The Alex I got to see Ms Brookes herself do it, whilst Billie Hardy went back to playing June. In such a demanding musical, this made a significant difference to the company and the routines all seemed to be that much slicker and energetic. 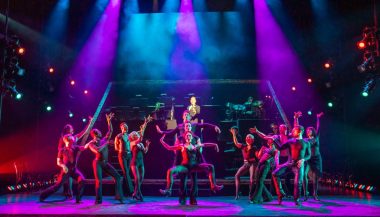 That is until a moment after the ‘suicide scene’ in act two when the curtain had to come in for some technical reason and we lost our heads and hearts in Chicago to talking amongst ourselves in Birmingham.

When the show eventually restarted it never quite got back into top gear – once again the magic of live theatre had cast its spell.

That incident aside, this is an excellent show.

Directed by Tony award winner, Walter Bobbie, it is in fact a revival of the original 1996 Broadway production from the legendary trio of Fred Ebb, John Kander and the one and only Bob Fosse.

The set is cleverly centred around the fabulous ten-piece band, who are sited within a gold framed, steeply raked podium. Andrew Hilton ably conducts and MCs the proceedings with character introductions, a bit of storytelling and the occasional quip.

This ‘Chicago’ is packed full of raunchy dancing, cool jazz, glitz, glamour and a liberal sprinkling of raw emotion.

It even has a ‘strictly diversity’ – two males dancing routine amongst the stockings and suspenders.

It’s set in the days of 1920s, when Prohibition brought huge profits for Chicago gangsters and the word ‘speakeasy’ was added to the dictionary. There were hundreds of speakeasies (aka illegal drinking clubs) in Chicago and Roxy Hart was a dancer at one of them. She murders her lover when he decides to leave her then hires top defence lawyer Billy Flynn to save her from the gallows. 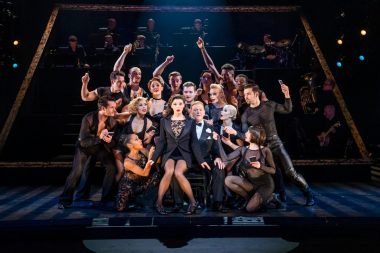 Flynn is played by Darren Day who brings just the right amount of flamboyance and arrogance to the role, with Flynn’s courtroom antics being much more about show biz than justice. Day’s ‘All I Care About’ when Flynn sings surrounded by feather floating girls in iconic Busby Berkley formation is spot on.

Joel Montague gives an almost show-stealing performance as Roxy’s cuckolded husband Amos. His rendition of the self-deprecating ‘Mister Cellophane’ brought a lump to the throat. He is certainly not invisible

The sexiest number in the show has to be the classic ‘Cell Block Tango’ where the death row girls dressed in black lingerie and sitting aside bentwood chairs, sing how their male victims ‘Had it Coming.’ I guarantee you’d find it difficult to find a male audience member who wouldn’t let them off with a caution.

Sinitta Malone plays the prison boss lady ‘Mama Morton’ with a smile and an entrepreneurial swagger as she acts as part-mother hen and part-manager to the girls.

As to the two leads – there is no denying Faye Brookes is a triumph and oozes charisma as Roxie Hart and Djalenga Scott makes for an equally captivating, Velma Kelly. Their closing duet of ‘Nowadays’ and ‘Hot Honey Rag’ did much to lift the temperature again towards the final curtain.

A great show with much to love including all the classic songs like, Razzle Dazzle, When You’re Good to Mama, My Own Best friend and of course Mister Cellophane.

The choreography is slick, the band is hot and this is a fun, highly recommended night out – and all that jazz!

Experts reveal tips and tricks to ‘survive’ a power cut

Learner drivers urged to be test-ready as pass rate falls